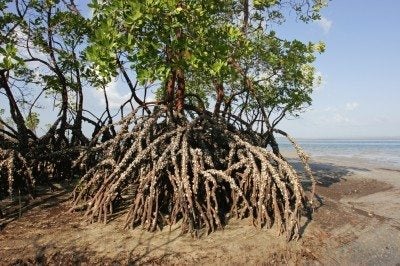 What are mangroves? Experts believe this fascinating and ancient family of trees originated in southeast Asia. The plants traveled to tropical, marine environments around the world via the buoyant seeds, which floated on ocean currents before lodging in the wet sand where they took root. As the mangrove plants established and mud gathered around the roots, the trees developed into large, very important ecosystems. Keep reading for more mangrove information, including the adaptations that allow mangrove plants to survive in the saltwater zones between water and land.

Mangrove forests serve a critical role by stabilizing shorelands and protecting them from erosion by the constant pounding of waves and tides. The storm buffering capability of the mangrove forests has saved property and countless lives around the world. As sand gathers around the roots, new land is created.

Additionally, mangrove forests are home to a vast number of living organisms including crabs, lobsters, snakes, otters, raccoons, hundreds of thousands of bats, and a vast variety of fish and bird species, to name just a few.

Mangrove plants have several unique adaptations that allow them to survive in harsh environments. Some types filter salt through the roots, and others through glands in the leaves. Others secrete salt into the bark, which the tree eventually sheds.

There are three definitive types of mangroves.

Mangrove environments are threatened, due in large part to the clearing of land for shrimp farms in Latin America and southeast Asia. Climate change, land development, and tourism also affect the future of the mangrove plant.