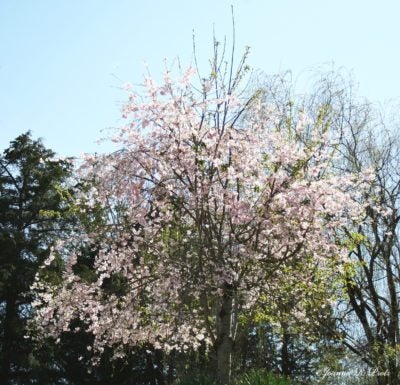 A graceful weeping cherry tree is an asset to any landscape, but without special care, it may stop weeping. Find out the reasons for a weeping tree growing straight and what to do when a cherry tree is not weeping in this article.

My Cherry Tree No Longer Weeps

Weeping cherry trees are mutations with beautiful weeping branches, but an ugly, twisted trunk. Standard cherry trees have strong, straight trunks but their canopy isn’t as attractive as a weeping canopy. To solve this problem, horticulturalists graft a weeping canopy onto a non-weeping trunk, giving the grafted tree the advantages of both types of trees. Some weeping cherries are the result of three trees. A straight trunk is grafted onto sturdy roots, and the weeping canopy is grafted on top of the trunk.

When a cherry tree stops weeping, it is sprouting stems and branches, called suckers from below the graft union. You can find this point on the tree by looking for the scar that results from the graft. There may also be a difference in the color and texture of the bark on the two parts of the tree. Straight trees are sturdier and more vigorous than the weeping mutations, so the suckers will take over the tree if allowed to grow.

Sometimes improper pruning can lead to a cherry tree not weeping. This article will help with that: Pruning Weeping Cherry Trees

How to Fix a Non-Weeping Cherry Tree

Remove suckers as soon as they appear to keep them from taking over the tree. You can sometimes pull off root suckers. Pulling it off is more effective than cutting because the sucker is less likely to regrow. You’ll have to cut large suckers off of the trunk and roots. If you keep the suckers under control, your tree will continue to weep.

If you have a weeping canopy with only a few straight branches, you can remove the straight branches. Cut them off at their source, leaving a stub no more than half an inch (1 cm.) long. The branch or stem is likely to grow back if you shorten it rather than completely removing it.

Once an entire weeping cherry tree is growing straight, there isn’t much you can do about it. Your choice is between removing the non-weeping cherry and replacing it with a new weeping tree or enjoying the tree as it is.

Printer Friendly Version
Read more about Weeping Cherry
<PreviousNext>
Did you find this helpful? Share it with your friends!
FacebookTweetPinEmail
Related Articles
Newest Articles
You might also like…
Additional Help & Information