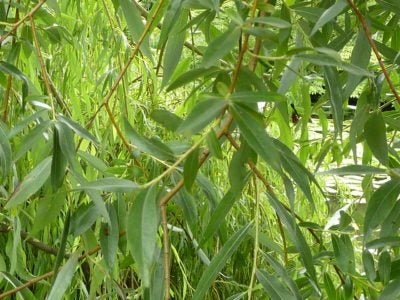 What is a golden willow? It is a variety of white willow, a common tree native to Europe, central Asia, and northern Africa. Golden willow is like white willow in many ways, but its new stems grow in a bright golden color. Growing golden willows is not difficult in the appropriate location. Read on for more golden willow information.

What is a Golden Willow Tree?

So, what is a golden willow exactly? According to golden willow information, it is a tree that looks like white willow but produces new growth the color of egg yolks.

These willows grow in U.S. Department of Agriculture plant hardiness zones 2 through 9. That means that if you live in the continental U.S., you can probably start growing the trees.

The bright new stems really stand out in your backyard in winter and provide interest to the dormant garden. In fact, many gardeners start growing golden willow trees because of the unusual color of the stems. That’s why golden willow is often grown as a multiple-stemmed bush rather than a single stem tree. If you grow it for the color of the young bark, you’ll want as many new trunks each year as you can get.

If you are wondering how to grow a golden willow, you’ll be happy to hear that it doesn’t require much maintenance. Golden willow tree care isn’t lengthy or complicated. Plant the golden willow in a sunny location in well-draining soil for best growth. The tree also grows in partial shade.

Golden willows have cultural requirements similar to those of other willow trees. That means that golden willow tree care is pretty much the same as any type of willow care, so think about planting it in a location with wet or moist soil.

Golden willow tree care might also include heavy pruning. If you want the tree to grow as a multi-stemmed shrub, cut the branches back close to the ground every winter. Do this before new growth appears. Since golden willow grows quickly, you may see shoots taller than you are before the end of the growing season.

Printer Friendly Version
Read more about Willow
<PreviousNext>
Did you find this helpful? Share it with your friends!
FacebookTweetPinEmail
Related Articles
Newest Articles
You might also like…
Additional Help & Information