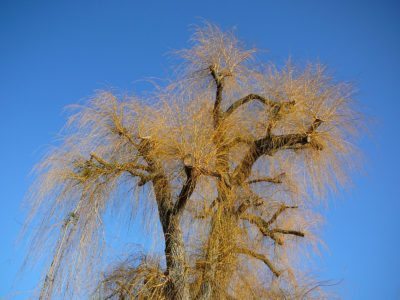 No tree is more graceful than the beautiful weeping willow with its long tresses swaying gracefully in a breeze. However, that cascading foliage and the branches that support it need to be cut back from time to time. In fact, trimming a weeping willow is essential to its health. If you are wondering when to prune weeping willows or how to prune a weeping willow, read on.

Why Cut Back a Weeping Willow?

A mature weeping willow is one of the most romantic of trees. You often see pictures of a willow growing by a still lake, its cascading branches reflected in the still surface of the water. That beautiful canopy must be maintained to keep it healthy and beautiful though. You need to cut back a weeping willow to keep it looking its best.

Trimming a weeping willow’s branch tips to even out the foliage of an ornamental tree makes sense. There are more serious reasons to consider weeping willow pruning, however. Weeping willow branches may grow all the way down to the ground over time. While this may be attractive, it makes it impossible for people to walk below the tree, or to drive a car there.

More important, if you cut back a weeping willow you can help the tree build a strong branch structure. The tree is stronger and more beautiful if grown with one single trunk. In addition, you’ll often see branches with weak attachment to the trunk that can break off and damage the tree.

When to Prune Weeping Willows

You’ll want to get out those pruners in late winter. Weeping willow pruning in winter allows you to cut back the tree when it is dormant. It also gets the willows in good condition before they start their spring growth.

How to Prune a Weeping Willow

When you start trimming a weeping willow, the first thing to do is to look over all the leaders. You need to select a central stem as the one to keep, then start your weeping willow pruning. Cut off each of the other competing leaders.

When you are figuring out how to prune a weeping willow, you’ll need to determine which of the branches are strong and which are not. Do not cut back a weeping willow’s strong horizontal branches. Branches with horizontal junctions to the trunk are not likely to split away from the trunk. Rather, trim off branches with “V” shaped junctions since these are the ones likely to break off.

Weeping willow pruning is also necessary after a storm. Trim off any branches that are split or damaged with a pruning saw. Make the cut just below the break. If you see any dead wood, trim back the limbs until only living tissue remains.

Printer Friendly Version
Read more about Willow
<PreviousNext>
Did you find this helpful? Share it with your friends!
FacebookTweetPinEmail
Related Articles
Newest Articles
You might also like…
Additional Help & Information