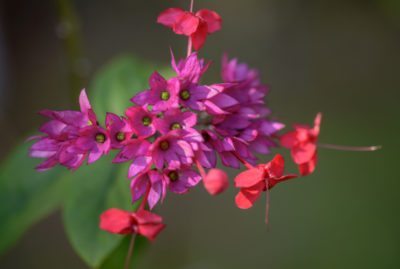 Are All Bleeding Hearts the Same?

Bleeding heart vine is a slender twining vine, native to Africa. The vine is attractive to gardeners because of the clusters of bright red flowers that grow along the vine stems. The flowers initially appear to be white because of the white bracts. However, in time the crimson blossoms emerge, looking like drops of blood dripping from the heart-shaped calyx. That’s where the vine gets the common name bleeding heart vine.

Since bleeding heart vine is native to tropical Africa, it is no surprise that the plant is not very cold hardy. The roots are hardy to U.S. Department of Agriculture plant hardiness zone 9, but the require protection from freezing.

The bleeding heart bush is an herbaceous perennial. It can grow to 4 feet (1.2 m.) tall and 2 feet (60 cm.) wide and bears heart-shaped flowers. The outer petals of these flowers are bright reddish-pink, and form the shape of a valentine. The inner petals are white. Bleeding heart bush flowers in spring. They grow best in U.S. Department of Agriculture plant hardiness zones 3 through 9.