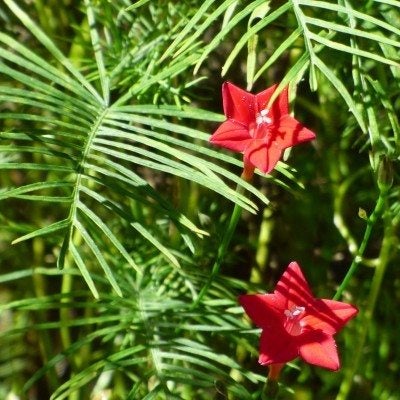 Image by Nikki Tilley via Gardening Know How

Cypress vine (Ipomoea quamoclit) has thin, thread-like leaves that give the plant a light, airy texture. It is usually grown against a trellis or pole, which it climbs by twining itself around the structure. The star-shaped flowers bloom all summer and into fall in red, pink or white. Hummingbirds and butterflies love to sip nectar from the flowers, and the plant is often referred to as a hummingbird vine. Read on for cypress vine info that will help you decide if this plant is right for your garden and how to grow it.

What is Morning Glory Cypress Vine?

Cypress vines are members of the morning glory family. They share many characteristics with the more familiar morning glory, although the appearance of the foliage and flowers is quite different.

Cypress vines are usually grown as annuals, even though they are technically perennials in frost-free areas of U.S. Department of Agriculture plant hardiness zones 10 and 11. In USDA zones 6 through 9, they may return year after year from seeds dropped by the previous season’s plants.

How to Care for Cypress Vines

Plant cypress vine seeds near a trellis or other structure that the vines can climb when the soil is warm, or start them indoors six to eight weeks before the last expected frost. Keep the soil moist until the seedlings are well-established. The plants can withstand brief dry spells, but they grow best with plenty of moisture.

Organic mulch helps keep the soil evenly moist and may prevent seeds from taking root where they fall. If left to take root at will, cypress vines become weedy.

Fertilize just before the first blossoms appear with a high phosphorus fertilizer.

An important part of cypress vine care is training the young vines to climb by wrapping the stems around the supporting structure. Cypress vines sometimes try to grow out rather than up, and the 10-foot (3 m.) vines can overtake nearby plants. In addition, the vines are a bit fragile and may break if they stray from their support.

Cypress vines grow with abandon in the Southeastern U.S., and in many areas they are considered invasive weeds. Use this plant responsibly and take steps to limit its spread when growing cypress vines in areas where they tend to become invasive.