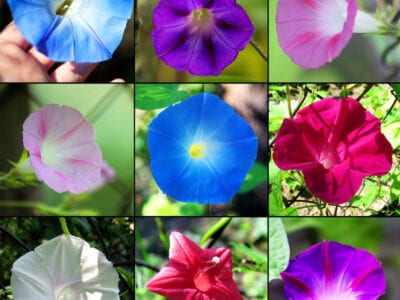 For many people, the summer garden always includes a tumble of shiny green leaves and sky blue flowers growing on a fence or up the side of a porch. Morning glories are old-fashioned crowd-pleasers, simple to grow and tough enough to grow in almost any environment. The classic Heavenly Blue morning glory flowers aren’t the only types that grow, however. Let’s learn more about some common morning glory varieties.

Morning glories are members of the Convolvulaceae family, which takes on a number of forms, depending on the part of the world in which it developed. There are over 1,000 types of morning glory flowers, from colorful climbers to subtle groundcovers. From cheerful flowers to edible plants, how many morning glory relatives do you know? Here are some of the most common morning glory varieties.

Note: Native Americans in the southwest used rare varieties of morning glory seeds in their spiritual life as a hallucinogenic. The difference between a lethal dose and one designed to send someone to the spirit world is so close, only the most knowledgeable of people are ever allowed to try the experience.