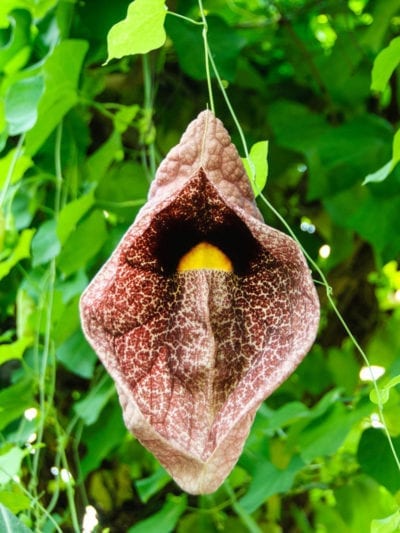 About Aristolochia and Butterflies

Dutchman’s pipe (Aristolochia macrophylla) is a vining plant native to eastern North America and thrives in USDA zones 4 to 8. There are a number of other types of Aristolochia, most of which are sought after as a primary food source for the Pipevine swallowtail butterfly. It seems that the aristolochic acids of these plants serves as a feeding stimulant as well as provides a habitat for eggs with a feeding ground for the resulting larvae.

The aristolochic acid is toxic to the butterflies but generally works more as a predator deterrent. When the butterflies ingest the toxin, it renders them poisonous to would-be predators. The severity of Dutchman’s pipe toxicity varies among the cultivars.

Unfortunately, the Dutchman’s pipe butterfly does not differentiate between varieties of Dutchman’s pipe. One variety, Giant Dutchman’s pipe (Artistolochia gigantea), is a tropical vine that is too toxic for Pipevine swallowtails. Many gardeners choose to plant this particular variety due to its fancy blossoms; however, this is a mistake in the interest of providing food and habitat for butterflies.

Giant Dutchman’s pipe entices Pipevine swallowtails into laying their eggs on the plant. The larvae may hatch, but once they begin to feed on the foliage, they die soon after.

If you are interested in hosting butterflies, stick with another variety of Dutchman’s pipe vine. The flowers may not be as extravagant, but you will be doing your part to save the waning varieties of butterflies left on our planet.

Printer Friendly Version
Read more about Dutchman's Pipe
<Previous
Did you find this helpful? Share it with your friends!
FacebookTweetPinEmail
Related Articles
Newest Articles
You might also like…
Additional Help & Information