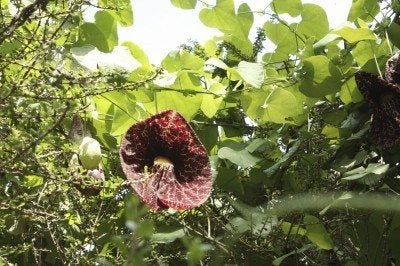 The dutchman’s pipe plant, or Aristolochia macrophylla, is grown both for its unusual blooms and its foliage. It should be pruned to get rid of any shoots or old wood that is clogging up the beauty of this plant. There are also specific times of year in which to prune the dutchman’s pipe, so you need to pay attention to its blossoming and growth habit.

You will want to prune your dutchman’s pipe vine for a couple of reasons.

How and When to Prune Dutchman’s Pipe

Pruning dutchman’s pipe is not too difficult or complicated. You can do minimal pruning whenever you want to remove any dead or diseased branches. You can clean up the dutchman’s pipe vine by removing damaged or crossed branches, which will give your vine a better look.

In the summertime, after the vine is done flowering, you have an opportunity for more intensive dutchman’s pipe pruning. At this time, you can cut back the shoots and prune back some of the old growth to the ground. This helps make the plant a little heartier for the next season.

Sucker pruning can be performed at this time too by removing some of the flowers that appear on the wood from the previous year. In other words, remove half the flowers that are on the old wood.  This makes for a stronger plant and a better growing season. This is really no different than picking suckers off your tomato plants or cherry trees.

Printer Friendly Version
Read more about Dutchman's Pipe
Next>
Did you find this helpful? Share it with your friends!
FacebookTweetPinEmail
Related Articles
Newest Articles
You might also like…
Additional Help & Information