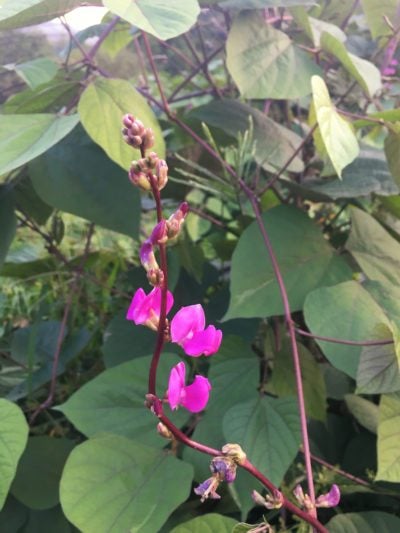 Knowing the pruning needs of your plant is a big part of good cultivation. Does hyacinth bean need pruning? It certainly needs training and support with its wild, rapid growth of up to 8 feet (2 m.) in a season. Pruning may sacrifice flowers, but if the plant gets out of control, you know when to prune hyacinth bean. Pruning is strictly for aesthetics and to keep the plant in a habit you require. Pinching when young is also useful to control the plant and direct growth as you want it to grow.

Hyacinth bean, also known as Lablab, is a vigorous climbing annual. It is a warm season plant native to Africa, but it has become an established food crop in many other countries. The ornamental aspect of the plant has taken off in warmer parts of the Americas. Deeply purple beans and amethyst and violet blossoms make the plant an attractive addition to any landscape.

Hyacinth bean pruning isn’t strictly mandatory, but it does help keep the growth of this speedy sprouter in check, so it’s always a good idea to learn how to prune a hyacinth bean and establish a healthier, more sturdy set of vines.

Hyacinth bean is just the plant to cover an old fence, rotting outbuilding, or scramble over downed logs. Its growth is rapid, and the numerous vines quickly cover anything in the plant’s path. Vertical training is useful to keep the plant in some semblance of order.

Brand new baby vines should be pinched when they get two or more sets of true leaves. This won’t hurt them but will force the ends to branch off and produce more vines. That keeps the plant looking bushy, not spindly with just a few vines. More vines mean more bright flowers and purple pods.

The vines are generally annual to semi-perennial and need to be started by seed every year except in cases where the plant drops seed and is allowed to self-sow.

When flowers begin to slow, it is time for hyacinth bean pruning to rejuvenate the vines and hopefully get another burst of growth and flowers. Cut plants back to within 6 inches (15 cm.) of the ground. New sprouts should form and grow quickly. Expect another flush of flowers but probably not beans in fall. You will need to retrain the vines as they sprout anew to give them plenty of air circulation and keep blooms in the best sun exposure.

When pruning any vine or plant, always use clean, sharp tools to prevent injury and the spread of disease. Hyacinth bean pruning occurs just above a bud node. This will ensure that the bud can still sprout and send out new growth in the case of late summer pruning for additional blooming.

Vines generally die back to the ground in areas that get cold season temperatures below 32 degrees F. (0 C.). In areas that don’t experience such low temperatures, cut the plants back to 6 inches (15 cm.) from the ground and cover them over with mulch.

Pull away the mulch in spring and, in most cases, the vines will have overwintered and will recommence growth.