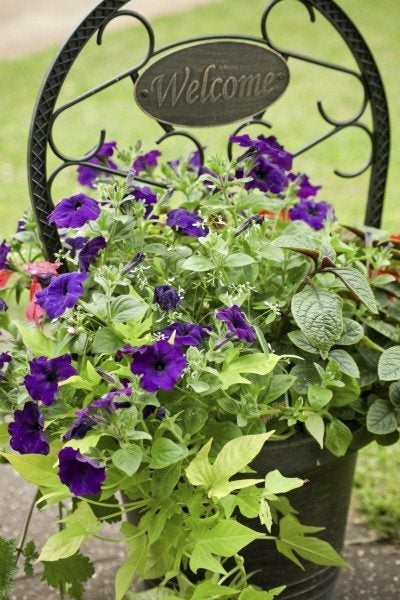 Vines are a fantastic addition to the garden. They can be used as centerpieces or accents and backdrops for other plants. They can be trained up nearly any structure to draw attention to a wall or distract from an unsightly necessity like an air conditioning unit. They are also very versatile in that they can be grown easily in containers. Keep reading for information on how to grow vines in a pot.

One of the most important things to consider when growing vines in containers is support. Vine support in pots can be as simple or as complex as you want it to be– you can use one or two sticks of bamboo or set a decorative obelisk in the center of the container. You can set your container next to a fence or support column and let nature take its course.

If you choose to put your support in the pot itself, place it before the plant gets too big– you want it to be able to begin climbing as soon as it can and don’t want to disturb its root system.

An alternative is allowing your vines to trail. This idea is especially popular for container arrangements of more than one type of plant. A tall centerpiece plant can be accented very nicely by a vine hanging over the edges around it. Vines also work well in hanging baskets, both climbing up the supporting wires and trailing as far as they like over the edge.

Some vines work better for different purposes. A few that make very effective trailing accents include:

Vines that are better suited to climbing include:

Now that you know a little more about growing vines in containers and which types work best, you are well on your way to enjoying these versatile plants.