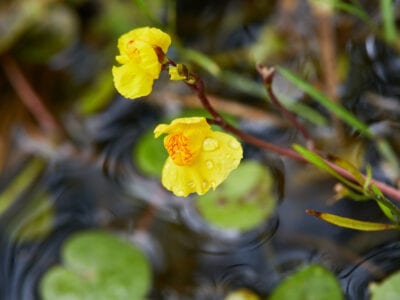 Bladderwort plants are rootless aquatic, carnivorous plants usually found in shallow ponds, lakes, ditches, marshes and slow-moving streams and rivers. Bladderworts (Utricularia spp.) are rootless plants with long, leafless stems that extend prominently above the water. Through the summer, the stems are topped by bright yellow to purple flowers. If you’re interested in growing bladderworts, or if you’re more concerned with bladderwort control, keep reading for more bladderwort information.

The bladderwort family includes about 200 species, but only about 50 exist in the United States. Although the visible stems are bare, the plants have small, underwater leaves that resemble rubbery bladders. The bladders are equipped with tiny hairs that are triggered by small insects, like mosquito larvae and water fleas. The trigger opens a “trap door” that lures the creatures with a sweet, slimy substance. Once the creatures are lured into the trap, they are eaten and digested by the plant.

The submerged portions of bladderwort plants provide critical habitat and food for a variety of small aquatic creatures. The plants are eaten by a huge number of water dwellers, including fish, ducks, reptiles, turtles, deer, frogs and toads. The flowers are pollinated by small insects such as flies and bees.

The presence of bladderwort plants indicates a healthy aquatic environment. However, the plant is rambunctious and can become invasive in certain conditions. When this happens, the plants can choke out native plants and alter the natural balance of chemicals in the water. The large mats, measuring as much as 7 feet across, present problems for boaters and other recreationists.

The environmentally friendly way of bladderwort control involves hand pulling the plant, or removing plants with an aquatic weed rake or weed cutter. It’s best to remove smaller patches, and it’s typical for plants to regrow from the roots.

Grass carp, which like to dine on bladderwort, often do a good job at keeping the plant in check, but be sure the fish are permitted in your area. Be patient; you probably won’t notice much benefit until the second season.

Check the regulations in your state if the problem is so severe that you are considering chemical control, because most states maintain tight control over use of herbicides in aquatic environments. You may need a permit, or you may be required to hire a licensed person.

If you want to cultivate bladderwort plants, you can dig up and transplant portions of mature plants in spring or shake dry flowers over a small dish or paper plate to remove the tiny seeds. Bladderwort plants reseed easily, but remember its considerable invasive potential.

You can also grow bladderwort plants indoors as tropical houseplants. The plants need at least four hours of bright sunlight and prefer another four hours of indirect or filtered light every day. Plant bladderwort in one part perlite and one part peat, and no potting soil. Set the container in a dish of mineral-free water.