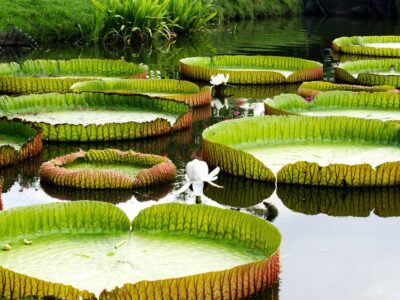 Water lilies are among the most beautiful and romantic plants, partly thanks to the famed paintings by Claude Monet. But the giant water lilies are especially spectacular with their enormous leaves, sometimes up to 6 feet (2 m) in diameter. Read on to learn more about these amazing plants.

It is hard to understand just how huge the leaves of the Amazon water lily (Victoria amazonica) are without seeing them. Fortunately, they are available for viewing in botanical gardens around the country. It helps to call to mind someone you know who is 6 feet tall (1.8 m.) since that is the potential diameter of each of the large leaves. The edges of the leaves are turned up, creating a sort of shallow cup.

The leaves “float” on the surface of the water, supported by spongy veins. Their size allows the plant to take in the maximum sunshine possible. The underside of each leaf has spines, thought to be a way of preventing fish from nibbling on them. Leaves are anchored by submerged stalks up to 26 feet (7.9 m) long that embed themselves in the lake or river bottom.

Given that the native range of this large lily is in South America, from Bolivia in the south to Guyana in the north, one might wonder why it is called the Victoria water lily. The name was chosen in 1837 as a way to honor Queen Victoria of England who had ascended to the throne that year.

The entire Victorian era was named after the Queen, and it was during this era that exotic plants, including the Victoria water lily became popular in cultivation.

A giant water lily in bloom is exotic and dramatic. Like the leaves, the flowers are oversize, dinner plate-size blooms that open at night and last a few days only.

The first day of a bloom, the white lily opens in the evening as a female flower, offering a sweet fragrance of pineapple. The blossom creates its own warmth, thought to be a giant water lily adaptation that lures scarab beetles to visit the flower.

Printer Friendly Version
Read more about Water Lily
<Previous
Did you find this helpful? Share it with your friends!
FacebookTweetPinEmail
Related Articles
Newest Articles
You might also like…
Additional Help & Information