Parrot Feather
By: Becca Badgett, Co-author of How to Grow an EMERGENCY Garden
Printer Friendly Version 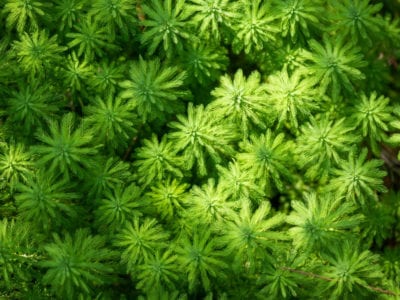 The attractive, feathery fronds of parrot feather plants (Myriophyllum aquaticum) often encourage the water gardener to use it in a bed or border. The delicate appearance of growing parrot feather complements other foliage in your water feature or bog garden.

Stop: before you make the mistake of planting this seemingly innocent specimen in your landscape, you should know that parrot feather research indicates that these plants are highly invasive. Once planted, they have the potential to readily escape cultivation and overwhelm native plants.

This has already happened in numerous areas in the United States. Only female specimens of the plant are known to grow in this country and multiply from root division and plant pieces in a process called fragmentation. Tiny bits of the plant have moved through waterways, on boats, and located themselves aggressively in many areas. Several states have laws that prohibit growing parrot feather.

Growing parrot feather began innocently enough in the United States. The South and Central American native came to the country in the 1800’s to decorate indoor and outdoor aquariums. The attractive, feathery plumes of parrot feather plants took hold and began to choke out native plants.

Parrot feather plants grow in freshwater areas from rhizomatous roots. Cutting the plant encourages it to grow, so controlling it can be complicated if it grows to restrict your drainage pipe or begins to destroy beneficial algae. Aquatic herbicides are sometimes effective in parrot feather plant care and control.

If you choose to grow parrot feather plants in or around your water feature or pond, make sure it is legal to grow it in your area. Plant only in a controlled situation, such as a container or indoor water feature.