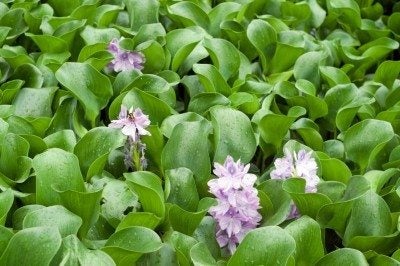 The garden offers us a variety of beautiful plants to pick and choose between. Many are selected because of their prolific fruit production, while others attract us with insurmountable beauty. Water hyacinth is one of those plants that is deceptively gorgeous, delivering a serious payload to anyone unlucky enough to plant them in warm climates. Water hyacinth in ponds seems like a great idea when you plant them, but it won’t be long before you need major help.

Although the brilliant purple water hyacinth isn’t yet federally listed as a noxious weed, plant and waterway experts the world over agree: this plant is bad news. The plant was initially spread because of its beautiful flowers, but the mistake of this particular decision was soon realized– after the damage couldn’t be undone. Now, water hyacinth threatens dams, waterways, and wildlife across the globe, often forming dense mats so thick that a grown man can walk across them.

So, while it’s not legally considered invasive, water hyacinth control occupies a great deal of time in the minds of experts everywhere. These people would tell you that it’s only a matter of time before this plant is listed and regulated because of its aggressive nature.

How to Control Water Hyacinth

If you’ve already been drawn in by the siren song of the water hyacinth, or a former owner of your property fell hard for this plant, you know the sheer determination it can exhibit. Managing water hyacinths is no small feat, but you can rid your garden ponds of these plants for good. The most effective methods so far found to control these plants include draining ponds completely, then removing and chopping up the plant (away from the pond, as even a small piece can regrow into new water hyacinths). Water hyacinth can then be composted, provided your compost pile is far from any water sources that could be affected by runoff, or double-bagged and thrown in the trash.

It may take several tries to rid your pond completely of water hyacinth, due to its weed-like behavior. If you’ve tried simply pulling this plant out of your pond in the past, without draining or cleaning the pond and equipment thoroughly, you’ve probably convinced yourself nothing will kill water hyacinth. However, by using an aggressive combination approach, you should be rid of your water hyacinth in no time.