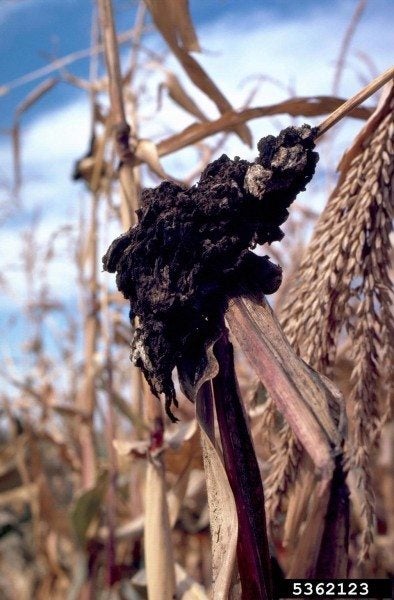 When black spores appear on your lawn or garden plants, it’s understandably frustrating -after all, you’ve given those plants lots of tender care and they’re sick despite your efforts. Try not to panic, we’ve got lots of information about treating black smut fungus, a common cause of black spores on turfgrass, small grains and ornamentals.

What is Black Smut Fungus?

Fungal diseases can be the most frustrating to deal with and they seem to spring up out of nowhere and disappear with the same level of mystery. Although black smut is a minor disease in most parts of the country, it’s important to know how to handle it when your lawn or garden suddenly develops a load of black spores.

Black smut is a fungal disease that appears on small grains, grasses, onions and even herbaceous ornamentals under the right conditions. Unlike many fungal diseases, though, plants affected by smut may live many years before they begin to show signs of the disease. Turf grasses, for example, often don’t look sick until three or four years after their initial infection.

Although signs of smut will vary based on the species of smut and the host, common smut fungus symptoms include galls or boils that enlarge any above-ground plant tissues, yellow striping on leaves or a powdery brown or black material on plant parts. The black or brown powder is actually a fine covering of reproductive spores and will occur late in the disease process.

Because smut spores are spread by wind and splashing water, it can be difficult to stop the problem at the source. Instead, treating black smut fungus has to focus on creating an unfriendly environment for the spores. When the outdoor temperatures rise above 60 degrees Fahrenheit (15 C.), it may seem like your smut problem is defeated, but it’s hard to kill the disease completely since the fungus resides in the growing points of the plant.

On a lawn, an infection of smut can be tolerated provided that you’re overseeding with a more resistant grass species, such as the Kentucky bluegrass. Most importantly, you’ll have to carefully monitor your fertilization practices, as smut thrives in a high nitrogen environment. Switch to a balanced fertilizer, such as a 10-10-10, and only apply it in the fall, after the smut pathogen is dormant.

Keeping your plants healthy will help them resist a smut infection, but if the disease is very severe in valuable plants, you may consider applying a fungicide. Demethylase inhibitors are very effective when applied in the spring at the label rates. Remember, fungicides are always a last resort option, as most fungal issues can be corrected by modifying the environment.