What Is A Viroid: Information About Viroid Diseases In Plants 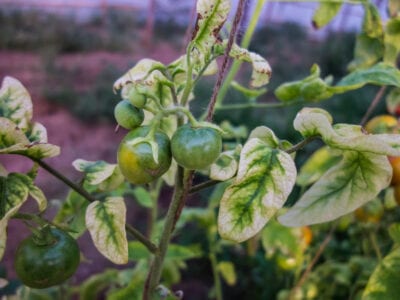 There are a lot of little tiny creatures that go bump in the night, from fungal pathogens, to bacteria and viruses, most gardeners have at least a passing familiarity with the monsters that wait to destroy their gardens. It’s a battleground and sometimes you’re not really sure who is winning. Well, here’s the bad news. There’s another class of critters, the viroids, running amok in the microscopic world, but they’re much less commonly mentioned. In fact, many diseases we attribute to plant viruses are actually caused by viroids. So kick back, and let us tell you about one more terror of the garden world.

Viroids are very similar to the viruses you might have studied in biology class. They are incredibly simple organisms that barely meet the criteria for life, but manage somehow to reproduce and cause problems everywhere they go. Unlike viruses, viroids consist of a single strand RNA molecule and lack a protective protein coat. They were discovered in the late 1960s, and since then we’ve been trying to determine just how viroids differ from viruses.

Viroid diseases in plants are caused by 29 viroids in only two families: Pospiviroidae and Avsunviroidae. Better-known viroid plant diseases include:

The classic signs of viroid plant diseases, such as yellowing and curled leaves, are believed to be caused by the viroids paring their own RNA with that of the afflicted plant’s messenger RNA, interfering with proper translation.

It’s all fine and good to understand how viroids work in plants, but what you’re really dying to know is what you can do about them. Sadly, you can’t do much. So far, we’ve yet to develop an effective treatment, so vigilance is the only preventive. It’s unclear if aphids transmit these tiny pathogens, but because they readily transmit viruses, it’s generally accepted that they are a potential vector.

What this means for you is that you’ve got to do your best to select only healthy plants for your garden and then protect them from viroids by fighting paths of transmission. Keep aphids off of your plants by encouraging insect predators, like ladybugs, and eliminating the use of potent insecticides. After all, those guys can respond much faster than you ever will to an aphid infestation.

You’ll also want to practice intensely good sanitation if you’re working near a plant that’s even questionably ill. Make sure to sterilize your tools between plants, using bleach water or a household disinfectant, and remove and dispose of sick plants promptly. With some effort on your part, you’ll be able to keep the viroid threat to a minimum in your garden.