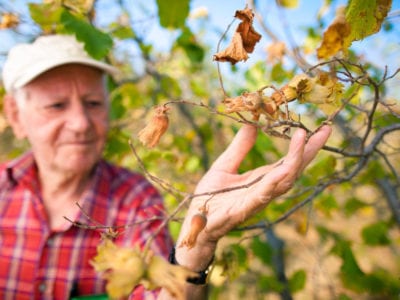 Drought has affected large swaths of the country in recent years and plants stressed from drought often die. If drought is common in your neck of the woods, it’s a good idea to learn more about beautiful, drought-tolerant plants. Healthy plants can tolerate short-term drought, but if the drought has lasted for an extended period, reviving drought-stressed plants may be impossible.

You may be able to revive dried-out plants if they aren’t too far gone or if the roots haven’t been affected. Drought is especially harmful when plants are actively growing early in the season.

Plants stressed from drought generally show damage in older leaves first, then moving on to younger leaves as drought continues. The leaves typically turn yellow before they dry up and fall off the plant. Drought on trees and shrubs is typically shown by the dieback of branches and twigs.

How to Save Plants from Drought

You may be tempted to revive dried-out plants with a lot of water, but too much sudden moisture can stress the plant and damage tiny roots that are working hard to get established. Initially, just moisten the soil. Thereafter, water well once every week during the growing season then allow the plant to rest and breathe before watering again. If they’re not too far gone, you may be able to rehydrate container plants.

Plants stressed from drought should be fertilized carefully. Fertilize lightly using an organic, time-release product, as harsh chemicals can cause more damage. Remember that too much fertilizer is always worse than too little and also keep in mind that heavily fertilized plants need more water.

After the plant has been fed and watered, apply 3 to 4 inches (7.5 to 10 cm.) of mulch to keep the roots cool and moist. Pull or hoe weeds that will drain moisture and nutrients from the plant.

If plants have suffered dieback and turned brown, cut it back to about 6 inches (15 cm.) from the ground. With any luck, you’ll soon notice new growth at the base of the plant. However, don’t prune if temperatures are still high, even damaged foliage provides some protection from intense heat and sunlight.

Watch for pests and diseases that may attack plants stressed from drought. Pruning may help, but a badly infested plant should be discarded to prevent spread. This is a good time to replace thirsty plants with a few that are more drought-tolerant.