Controlling Turtles In The Garden 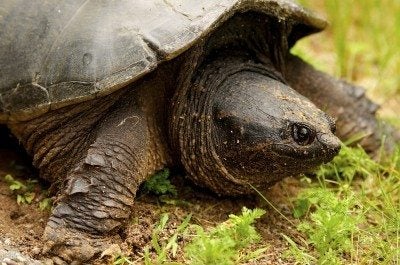 Landowners that live near water sources may be plagued by an unusual visitor. Turtles lay eggs in the soil and are on the move looking for nesting sites as their natural habitat shrinks. If your garden has loose sandy soil, the location may look like a favorable site to a displaced turtle.

Most turtles are harmless, but snapping turtle control may be necessary to avoid children and pets from becoming injured. If you’re wondering “how to get rid of turtles in my yard,” read on for some tips and cautions about handling nesting turtles.

Turtles in the Garden

Turtles in the garden may be a delight or a nuisance, depending upon the variety and nesting preferences. If they prefer to nest in a garden bed, the area cannot be disturbed, which puts the brakes on any further landscape planning. Additionally, snapping turtles have a bite like a steel trap and are considered dangerous with small children and pets around. However, these animals are normally gentle and fun to watch for the brief period they are in your landscape.

If you see a turtle wandering around your property, the best thing to do is leave it alone. If it is a female, she is likely looking for a good nesting place and boy is she picky. If you are lucky, she will dig a mound to lay her eggs into and cover it up. The female then leaves until the next season.

It is important to protect the nesting site from dogs and other animals that might dig it up. Do not try to remove it yourself, as turtle egg embryos are killed easily when disturbed. If the annual appearance of the animal distresses you, you can try using a turtle trap and move the animal. Controlling turtles of most species isn’t necessary, however, unless you just hate turtles for some reason.

How to Get Rid of Turtles in my Yard

The only true threats with turtles are the snapping turtles. They have wicked pointed beaks and jaw pressure meant to cut their prey in half. These animals have the ability to turn their necks all the way around and stretch to bite up to 2 feet (61 cm.) from their bodies.

Snapping turtles can just be left along to do their business but, in some instances, they should be removed. You can call animal control and they will attempt using turtle traps. You can also try it yourself. Approach quietly from the rear and carefully slide your hands under the back edges of the shell on either side–DO NOT pick the turtle up by the tail. Large snapping turtle control may require two adults to lift.

Most species of turtle wouldn’t hurt a fly. Let me amend that. They wouldn’t hurt a human. Allowing a female to make a nest in your garden is an excellent teaching tool for children and will delight them at hatching time.

The young will leave your landscape after hatching and head for the nearest body of water, never to be seen again. This means you have a rare opportunity to witness a fascinating part of the animal’s life cycle.

My advice is to get some chicken wire and make a dome over the nest to protect it from raccoons, possums, and other nest raiders. Then sit back and wait until about three months have passed. Soon, you can view the emergence of the tiny turtles and watch as they march out of your life into a more natural setting.