Possum Control: How To Trap Opossum 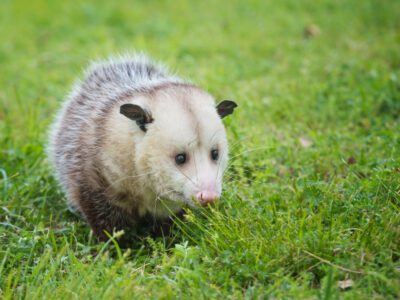 Opossums are frequently considered a nuisance in and around the garden, especially when they feed on or trample plants. They can also rummage through garbage cans or steal your pets’ food. How to get rid of an opossum can be tricky but with a little perseverance, the backyard possum may be convinced to move elsewhere.

The best way to combat opossum problems is to understand their habits. While they prefer wooded areas or open fields near streams, they will take up residence in abandoned burrows, tree crevices, brush piles, or areas beneath steps, decks, and outbuildings.

These animals are also nocturnal, meaning they’re typically active only at night, sleeping throughout the day. This can make it somewhat difficult to “see” the intruder attacking your garden. However, they will usually leave some telltale signs of their presence through droppings, tracks, overturned pet food dishes or garbage cans, and plant damage. The backyard possum is considered an omnivore as well, feeding on fruits, nuts, insects, eggs, and small animals like frogs and mice.

How to Get Rid of an Opossum

Opossum repellents. There are numerous products on the market targeted at repelling these wild animals. However, these generally offer little relief. Other possum control methods include the use of motion activated sprinkler systems, which can startle the creatures and frighten them off.

Traps. Trapping opossums is another common method employed for possum control. Knowing how to trap an opossum isn’t as difficult as what to do with one once it’s caught. This normally requires relocation by an authorized (licensed) wildlife expert in most areas.

Killing these animals should only be a last resort, and is often not permitted in most states. Nonetheless, trapping them in a box or cage-like trap is fairly easy. Traps should measure about 10 by 12 by 32 inches (25 x 31 x 81 cm.). Set the traps along trails and known travel routes, bating them with fruit such as overripe melons, grapes, or bananas.

Fencing. The erection of woven wire or electric fencing is sometimes used for possum control. Fencing around garden areas should be at least 4 feet (1 m.) high, with the top foot (31 cm.) or so facing outward, away from the garden to prevent them from climbing over. Adding electric fencing approximately 3 to 4 inches (8-10 cm.) over the top may also help.

The best defense, however, is making the area less appealing to opossums. Overgrown trees and shrubs should be pruned. Brush piles and similar debris should be removed. Fallen fruit from trees should be kept clean. Garbage cans should have tight fitting lids and pet food should not be left out at night. It is also a good idea to close or block off any entrances or openings under or near the home such as porches, decks, buildings, etc.