Domestic Pigs In The Garden: How To Prevent Pig Rooting Damage 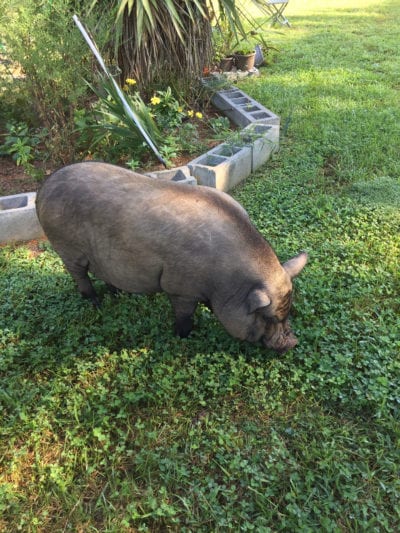 Of all pests that can assault a garden, a less common one is pigs. In some states, escaped domestic pigs have become feral and run around disruptively. Yet another scenario can simply be a neighbor’s pig (or multiple pigs) deciding your landscape looks infinitely tastier than their own, leading to pig-rooting damage in your garden.

If you’ve ever had to handle pigs in the garden, you know it’s no joke and might be wondering how to keep pigs out of the garden.

Pigs are highly intelligent but what really motivates them is food. They spend a good portion of their day eating or looking for things to eat. This is where your garden comes into play. Imagine being pigs in a pen. Although getting three square meals a day and plenty of water, they can see and smell a cornucopia of edible delights just beyond the fence in your garden.

Pigs will eat leaves, trample plants, and dig up roots all while damaging trees as they rub against them in their frenzied search for a tasty morsel. Pig rooting damage can become so severe that entire areas are rendered bare and unrecognizable. Since even the most intelligent pig can’t read a “no pigs allowed” sign, how do you keep pigs out of the garden, and is there a way to repel them?

How to Keep Pigs out of the Garden

A fence is an obvious solution, although the clever animal can sometimes dig underneath or even push over a fence. An electric fence is a better option for keeping pigs away from garden areas. A small electric jolt won’t hurt the pigs but does train them rather quickly to avoid the area. If electrifying the fence is a bit extreme, installing a plastic mesh fence around the garden can help deter the pigs. They don’t want to walk through something that they might get tangled up in.

Of course, if you are home when the piggys enter the garden, loud noises made can scare them off, at least temporarily. What if you aren’t around though? Install a motion detector that will emit a stream of water. This may scare the pigs off and teach them to avoid your garden, or being the smart animals they are, the animals may figure out all they’ll get is a cooling bath instead. Motion-activated devices are a temporary deterrent at best.

Humans in the garden do tend to deter pigs, sometimes. Try putting a scarecrow, mannequin, or the like in the garden. Move the scarecrow around every few days so the pigs don’t get used to it and think a real person is in the garden.

Pigs have a terrific sense of smell and are attracted to the fruits and veggies you are growing especially overripe ones. To deter the pigs, clean up any fallen or overripe fruit or veggies. Avoid growing crops that pigs enjoy, such as strawberries and other sweet fruit. Also, keep Fido’s food in the house. Pet food left outside attracts the attention of pigs as well as other opportunistic critters.

Last Resort to Getting Pigs out of the Garden

If all else fails, it might be time to capture the pig. There are some agencies that may be able to assist you with this endeavor and let’s just say that assistance will be needed. You may decide to bait a trap such as a dog crate or try to convince the pig to get into a container with the aid of food and patience. Patience will be needed.

Pigs in the garden aren’t going to give up on their little Eden without a protest. Take it slow and easy, and offer plenty of food, the way to any good pigs’ heart.