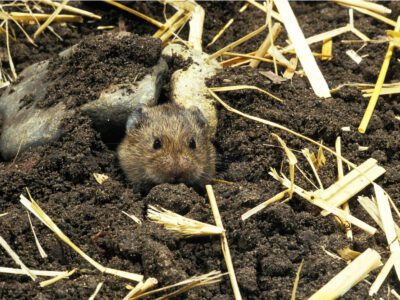 Voles are among the least talked about and most damaging of the rodents that can invade a garden. These rodents can literally overrun a yard in a short period of time, chewing their way through plant roots, bulbs, stems, and seedlings, all the while multiplying at a furious rate. This can leave a frustrated gardener wondering how to get rid of voles that have taken over their yard. Vole eradication is possible with some extra effort.

How to Get Rid of Voles

Vole control starts with a clean garden. Voles will make themselves at home in heavy underbrush and weedy areas. Making sure that any overgrown areas in the garden are cut back not only discourages voles from taking up residence in your garden, it also makes sure that any voles that you do have are more vulnerable to predators such as snakes, owls, hawks, coyotes, and cats.

Another step in vole control is to locate and fill in or collapse any tunnels and burrows you may find. Their burrows tend to be short, even simply small pockets in the ground, but they may connect the burrows with extensive tunnel systems. The fewer places voles have to hide and breed, the fewer voles you will have in your yard.

You can also try using vole repellent, but because vole populations tend to grow quickly and because they frequently damage plants below the ground, vole repellent may not be very effective. If you wish to try using a vole repellent, predator urine is normally recommended. Ultrasonic rodent repellents may also be useful for getting rid of voles.

How to Kill Voles

The next step in getting rid of voles is to decide what method you will use when deciding how to kill voles in your yard.

If your yard is small, vole traps can be used. Vole traps are simply mouse traps that have been placed in the yard, particularly near where known burrows are or were.

Rodent poison can also be an effective way of killing voles. When using poison though, be aware of the other animals in your yard. Rodent poison will not only kill voles, but can kill pets, beneficial animals, and even make children ill if they unintentionally handle or eat the poison laid out for voles.

Making your garden a haven for predators of voles is also recommended. Attracting snakes and owls and keeping a pet cat can help reduce the vole population in your garden.