Deter Deer And Prevent Ticks By Getting Rid Of Honeysuckle 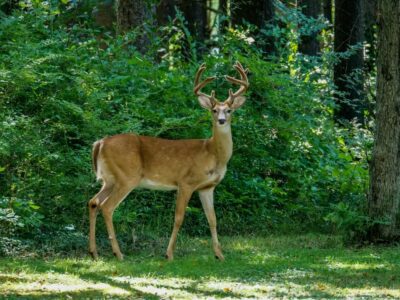 Tick prevention is a major concern in most areas. Even in your own backyard, you can be exposed to disease-carrying ticks. Any steps you can do to prevent their populations from thriving will protect you and your pets and family. Surprisingly, this includes removing non-native honeysuckle plants.

Why is Bush Honeysuckle Bad?

Bush honeysuckle is a group of non-native deciduous shrubs. Originating in Asia, these plants came to North America via Europe in the late 1800s. Not long after, they became popular landscaping and ornamental species.

Bush honeysuckles are now considered invasive throughout most of the eastern and midwestern states. There are many reasons to consider these non-native honeysuckles a problem:

It isn’t just wildlife and native plants and animals that suffer because of invasive honeysuckle. Researchers have found that bush honeysuckle is also bad for human health.

What this means for human health is greater exposure to ticks and tick-borne diseases. Studies have found that white-tailed deer numbers can be as much as five times higher in areas with bush honeysuckle. With deer, come tick species that carry several diseases.

How to Prevent Ticks in the Garden

Two important things you can do to reduce tick populations go hand-in-hand: remove invasive honeysuckle and keep deer out of the garden.

If you have bush honeysuckle in your yard, remove it entirely. If you’re not sure, read up on identifying the species. Similar species to distinguish it from include Japanese and native honeysuckles, which are all vines, coralberry, winterberry, and native viburnums.

The simplest way to get rid of invasive honeysuckle is to pull it out by its shallow roots. Do this early in spring or in fall when they are greener than native species. This will make it easier to determine what to pull.

Removing honeysuckle will go a long way toward minimizing deer in your garden, but there’s more you can do. Plant more species that deer don’t like to eat. Use fragrant plants—onions, garlic, herbs—near plants that deer like as a way to repel them. A fence or thick hedge can also keep deer out of the yard.

Use motion-activated devices to scare off deer that venture into your yard at dawn, dusk, and nighttime. Lights that come on at night when they move, for instance, are a deterrent.

Keeping invasive plants and deer out of your garden will benefit your own safety and that of your native wildlife. Start with the honeysuckle to significantly reduce tick numbers and use other measures as needed.

Printer Friendly Version
Read more about Deer
<Previous
Did you find this helpful? Share it with your friends!
FacebookTweetPinEmail
Related Articles
Newest Articles
You might also like…
Additional Help & Information