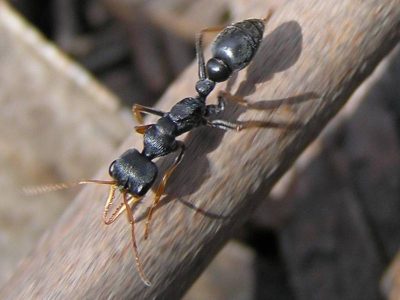 Jack jumper ants may have a humorous name, but there’s nothing funny about these aggressive jumping ants. In fact, jack jumper ant stings can be extremely painful, and some cases, downright dangerous. Read on to learn more.

What is a jack jumper ant? Jack jumper ants belong to a genus of jumping ants found in Australia. They are large ants, measuring about one-half inch (4 cm.), although the queens are even longer. When they’re threatened, jack jumper ants can jump 3 to 4 inches (7.5-10 cm.).

The natural habitat for jack jumper ants is open forests and woodlands, although they can sometimes be found in more open habitats such as pastures and, unfortunately, lawns and gardens. They are rarely seen in urban areas.

While jack jumper ants’ stings can be very painful, they don’t cause any real problems for most people, who experience only redness and swelling. However, according to a fact sheet distributed by the Tasmania’s Department of Water, Parks, and Environment, the venom can cause anaphylactic shock in approximately three percent of the population, which is believed to be approximately double the rate for an allergy to bee stings.

For these people, jack jumper ant stings can lead to symptoms such as difficulty breathing, swelling of the tongue, abdominal pain, coughing, loss of consciousness, low blood pressure, and increased heart rate. The bites are potentially life-threatening but, fortunately, deaths due to stings are very rare.

The severity of a reaction to jack jumper ant stings is unpredictable and may depend on a number of factors, including the time of year, the amount of venom that enters the system, or the location of the bite.

Jack jumper ant control requires the use of registered pesticide powders, as no other methods are effective. Use pesticides only as recommended by the manufacturer. Nests, which are difficult to find, are usually located in sandy or gravelly soil.

If you’re traveling or gardening in Australia’s remote locations and you’re stung by a jack jumper ant, watch for signs of anaphylactic shock. If necessary, seek medical help as soon as possible.