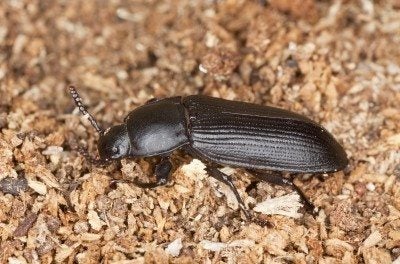 Darkling beetles get their name from their habit of hiding during the day and coming out to feed at night. Darkling beetles vary quite a bit in size and appearance. There are over 20,000 species of beetles called darklings, but only about 150 of them are native to the U.S. Darkling beetles damage garden plants by chewing off seedlings at ground level and feeding on leaves. Read on to learn more on how to identify and control these pesky insects.

It’s rare to see a darkling beetle in daylight, although you may occasionally find them running across the ground from one hiding place to another. They like to hide under bits of debris and clods of dirt during the day and come out to feed at night.

Many types of birds, lizards, and rodents eat darkling beetle larvae, which are called mealworms. If you feed your pets mealworms, it’s better to buy them from a pet store or mail order source rather than collect them from the wild. Wild mealworms may be contaminated with insecticides or other toxic substances. The species you find in pet stores are bred specifically for animal consumption and have a high nutritional value.

Darklings begin life as small white eggs under the surface of the soil. Once they hatch, the larvae (mealworms) feed for several weeks. They look like rounded worms, cream or light brown in color. The larvae shed their hard skin as many as 20 times as they grow.

After three to four months of feeding, the larvae crawl back into the ground to pupate. They emerge as mature beetles, capable of living 20 years or more if they manage to avoid becoming a meal for other animals.

Darklings range in size from one-twelfth to 1.5 inches (2 mm. to 4 cm.) in length. They are solid black or dark brown and never have any colored markings. Their wings are fused together over their back, so they cannot fly. Their shape varies from nearly round to long, narrow, and oval.

All darklings have antennae coming from the area near the eye. The antennae have lots of segments, with an enlarged segment at the tip. This sometimes gives the antennae a club-like appearance, or it may look as though it has a knob at the tip.

Insecticides aren’t very effective at getting rid of darkling beetles. You should also be sensitive to the fact that when you try to kill these pests with toxic substances, you may also be poisoning the animals that feed on the beetles and their larvae. The safest method of getting rid of these pests is to eliminate their food sources and hiding places.

Remove decomposing organic matter and plants that have reached the end of their cycle promptly. Although darklings sometimes eat live plant material, most of them prefer decomposing matter. Besides eating garden debris, they also use decaying plants as hiding places.

Keep the garden weed free and remove weeds growing at the edges of the garden. Dense weeds serve as safe havens for darklings seeking shelter during the day. You should also remove stones, dirt clods, and bits of wood that may offer shelter.