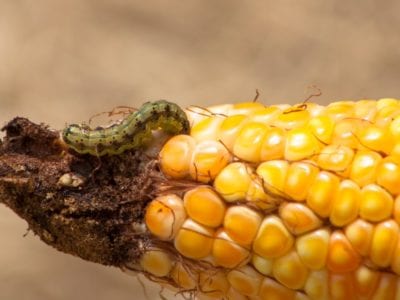 Earworm control in corn is a concern of both small and large scale gardeners. The Heliothus zea has the distinction of being the most destructive corn pest in the United States. Thousands of acres are lost each year to the larvae of this moth and many home gardeners have been discouraged by its damage. There are, however, ways to prevent corn earworms from wreaking havoc in your corn patch.

Before we discuss how to get rid of corn earworms, we need to talk about the life cycle of the moth since many of the treatments, particularly organic control of corn earworms, are dependent on the stage of development to be most effective.

Corn earworm moths are most active during the evening and at night. They’re small moths with wingspans of only 1 to 1 1/2 inches (2.5-4 cm.). They appear in early June and search out corn silk on which to lay their eggs. One female moth can lay anywhere from 500 to 3,000 eggs and each egg is but half the size of a pinhead.

Larvae appear in two to ten days and start feeding immediately. The larvae eat their way along the silk to the ears where they continue to feed until they are ready to fall to the ground.

They then burrow into the soil where they remain until their pupal stage has passed. New adults emerge in 10 to 25 days except for the last batch of fall. Those will remain underground until the following spring.

How to Prevent Corn Earworm

Organic control of corn earworms in sweet corn begins with early planting. The moth’s population is at its lowest in spring. Corn that matures early will have fewer problems. Choosing resistant varieties will also aid earworm control in corn. Staygold, Silvergent, and Golden Security are a few of the reliable resistant strains available.

As odd as it may sound, to prevent corn earworms from gaining entry to the ears, try placing clothespins where the silk joins the ear. This will block the worm’s access and can be quite successful on a small scale. In the fall, get rid of earworm’s overwintering pupae by turning the soil and exposing them to freezing temperatures.

How to Kill Corn Earworms

There are several biological answers to how to kill corn earworms. Trichogamma is an egg parasite wasp that lays its eggs inside the eggs of the earworm. Control in corn is 50 to 100% successful.

Green lacewings and soldier beetles are also effective answers to how to kill corn earworms. Bacillus thuringiensis is another. It’s a natural pathogen sold under the name Dipel and it kills only moth larvae and not beneficial insects.

Applying mineral oil to the silk where it inserts into the ear is an effective treatment to get rid of earworms. The oil suffocates the larvae.

There are insecticidal sprays that are used for earworm control in corn, but great care should be taken in the use of these products. While they may prevent corn earworm’s infestations, they can also harm beneficial insects and pose a toxic hazard to honeybees. Apply these products before 6 a.m. or after 3 p.m. to reduce their environmental damage. Time your spraying to egg laying and hatching to reap the greatest benefit.

Whether you choose chemical, biological, or organic control of corn earworm infestations, there are answers and treatments out there. Don’t let those devilish insects ruin the pleasure of raising your own sweet corn.