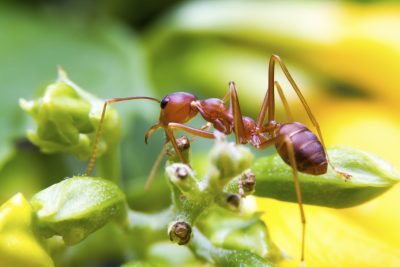 Between medical costs, property damage, and the cost of insecticides to treat fire ants, these tiny insects cost Americans more than 6 billion dollars each year. Find out how to control fire ants in this article.

If it weren’t for their dangerous and destructive side, you could almost think of fire ants as beneficial insects. After all, they can move and loosen more earth than earthworms, and they help keep several species of pest insects under control. But it would be hard to convince most people that the benefits outweigh the disadvantages. As if the painful bites weren’t enough, they also chew on electrical wires and build nests in inappropriate places where they damage homes and other structures.

Fire ant control in gardens and lawns doesn’t have to involve dangerous chemicals. There are a couple of organic insecticides that are as effective the toxic options. In addition, there are other methods that, while not considered organic, pose a minimal risk to humans, animals, and the environment.

How to Control Fire Ants

A number of home remedies are promoted as fire ant pesticides, but most don’t work. Pouring grits, club soda, or molasses on a fire ant mound has no effect. Treating a mound with gasoline or ammonia may work, but it is dangerous. These chemicals contaminate the soil and ground water, and it takes years to get rid of the contamination. Drenching the soil with two to three gallons (7.5 to 11.5 L.) of boiling water is effective about 60 percent of the time. Of course, boiling water also kills plants in the immediate area.

Organic fire ant pesticide includes d-limonene, which is made from citrus oil, and spinosad, which is produced by a soil microbe. Spinosad remains active for a few days, and d-limonene lasts only a day. These insecticides work best when used along with a bait.

Baits are insecticides dissolved in food that ants like to eat. Before you spread the bait, test to see if the ants are foraging. Place a small pile of bait near a hill and wait to see if the ants carry it off. If you don’t see evidence that the fire ant pests are interested within an hour, wait a few days and try again.

Spread the bait over the entire lawn and garden. After the amount of time indicated on the product label, treat remaining hills with one of the organic fire ant pesticides. You can also use the pesticides to treat new hills that form after you spread the bait.

If the infestation is severe, it is probably best to call in a professional.