Removing Earwigs From The Garden 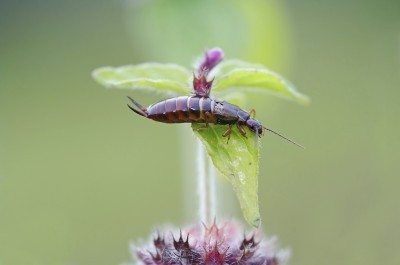 Earwigs are one of those garden pests that look very frightening, but, in fact, earwigs are rather harmless. Admittedly they look rather scary, like a bug that has gotten run over by a steamroller. They have long, flat bodies and their legs stick out to the sides, which gives them a slithery motion when they move. They also have a set of pinchers on the ends of their abdomens.

It is because of the earwig’s appearance there is a superstition that earwigs will crawl into a person’s ear and bore into the brain. This superstition is absolutely not true. Earwigs are scary looking, but they are not harmful to people or animals.

Earwigs in the Garden

However, that is not to say that earwigs are not harmful to your garden. Earwigs will chew on flowers, vegetables, and other plants. Earwig damage can be identified by ragged edges or holes found on the leaves and petals of a plant.

Most of the time, a gardener will not actually see the earwigs in their garden. If they do see them, it will only be briefly as they watch an earwig scurry away after being exposed to sunlight somehow. Earwigs are nocturnal insects. They prefer dark areas and during the day, they can be found hiding in dark areas.

Earwigs also need damp areas to survive. They commonly show up in the garden if they can find a moist dark area to survive in, such as mulch, woodpiles, or compost piles.

Removing Earwigs from the Garden

The common advice given for eliminating earwigs from the garden is to reduce or eliminate moist, dark conditions from your garden. Frankly, eliminating these conditions from a healthy garden is nearly impossible though. A compost pile and mulched beds are part of a well-tended garden. Instead, try to remove any non-essential elements that may be providing these conditions so you can at least reduce the number of areas in your garden where earwigs can flourish.

You can also try adding barriers to the edges of your garden. Earwigs cannot travel very far, especially over dry conditions. Adding a small moat of consistently dry material, such as gravel or coarse sand, around garden beds will help to keep earwigs out of the beds.

You can also set up earwig traps. Roll up a section of newspaper and wet it down slightly. Place the damp newspaper roll into the part of the garden that you are having an earwig problem. Leave it there overnight. The earwigs will crawl into the newspaper as it provides the exact conditions that they like.

In the morning, dispose of the roll of newspaper either by burning it, dousing it with boiling water, or immersing it in a solution of water and bleach.

You can also use pesticides to eliminate earwigs, but some care should be taken if using this method as pesticide will kill both earwigs and helpful insects, such as ladybugs and butterflies.

Printer Friendly Version
Read more about Insects
Next>
Did you find this helpful? Share it with your friends!
FacebookTweetPinEmail
Related Articles
Newest Articles
You might also like…
Additional Help & Information