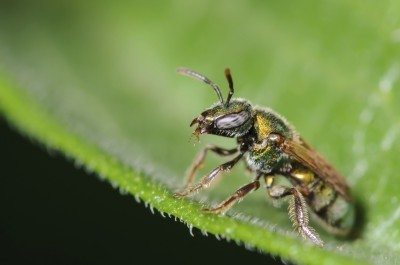 Sweat bees are often seen flying around the garden with a heavy load of pollen on their back legs. Pollen laden sweat bees are on their way back to the nest where they store their harvest to feed the next generation. It’s a good idea to give them a wide berth so they don’t see you as a threat. Don’t let the fear of sweat bee stings keep you out of your garden though. Find out how to control sweat bees and avoid stings in this article.

What are Sweat Bees?

Sweat bees are a group of solitary bee species that live alone in underground nests. Some species resemble bumble or honeybees, while others resemble wasps. About half of the North American species have a green or blue metallic sheen. A few nests don’t present a serious problem, but you should take steps to control the bees when they build several nests in the same area.

Since they build their nests on bare, dry dirt, the obvious sweat bee control method is to grow something. Any plant will do. You can expand your lawn, plant groundcovers or vines, or start a new garden. Sweat bees in gardens may come from the edges of the garden where you have removed vegetation or between rows in the vegetable garden. You can get rid of them by covering the soil with landscape fabric and mulch.

Sweat bees are important pollinators, so avoid the use of insecticides as much as possible. If you find them in an area where they present a danger to you and your family, try a relatively safe insecticide such as permethrin.

Do Sweat Bees Bite or Sting?

Sweat bees are attracted by human sweat, and the females can sting. Once the stinger pierces the skin, it continues to pump venom until you pull it out, so remove it as quickly as you can. Apply ice to the area to reduce pain and swelling. Over-the-counter pain relievers help with swelling and itching. A paste made from baking soda, meat tenderizer, and water may help with the pain experienced immediately after the sting.

Seek medical attention if any of the following apply: