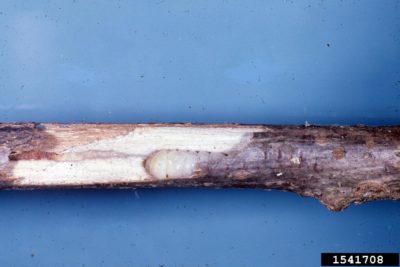 The common names of bugs can give useful information about the type of damage they might do to your plants. Twig girdler beetles are a great example. As the names suggest, these insect pests chew the bark all the way around small branches, girdling and killing them. If you want to know more about twig girdler damage or twig girdler control, read on.

What are Twig Girdler Beetles?

What are twig girdler beetles? They are a type of insect that damage hardwood trees. Their scientific name is Oncideres cingulata. These beetles don’t sting you, nor do they carry infection to your plants. However, twig girdler damage can be significant, especially in pecan, hickory, and oak trees.

If you have twig girdler beetles, you’ll know it. Their damage is very conspicuous in late summer. You’ll see leaves wither and die prematurely. You’ll also notice twigs and branches dropping from your trees and piling up beneath them on the ground.

If you inspect the twigs, you’ll see the twig girdler damage. The twigs are gnawed off cleanly and precisely, almost as if someone had pruned them. However, look closer and you’ll see a faint rounding of the chewed end, the work of the adult female twig girdler. That’s when you have to start thinking about twig girdler control.

The adult female twig girdler lays her eggs inside a tree’s twigs and smaller branches. She selects a branch about as thick as a pencil. She gnaws a circular incision all the way around the twig, taking out not just the bark but also digging deep into the wood. In this girdled area, the female beetle digs out a slightly deeper hole and places an egg inside.

In a few days, the twig falls to the ground. The egg hatches out in the wood of the twig, regardless of whether or not it has fallen to the ground. The larva grows and overwinters in the twig. By the middle of the next summer, the larva has pupated and soon emerges as an adult.

When you notice that your trees are attacked by twig girdlers, you’ll want to turn your thoughts to twig girdler control. Don’t start by buying pesticides for treating for twig girdlers. Your first step should be a thorough clean-up of the backyard.

If you pick up and dispose of all of the twigs on the ground beneath trees that have been attacked, you are affecting twig girdler control. Many of the twigs you destroy will contain eggs or larva. Treating for twig girdlers by removing the fallen twigs goes a long way toward ridding the area of this pest.