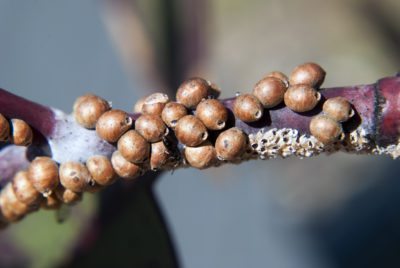 Armored scale insects are hiding under your nose right now and you probably don’t even know it. These master mimics are everywhere, but you can learn how to detect and eliminate them from your plants in this article. Read on to learn more about these strange sap-sucking insects.

What is Armored Scale?

Of all the garden pests you’ll meet as you cultivate and love your garden, armored scale insects may be the most interesting and frustrating. If your plant has suddenly developed a lot of unusual bumps, lumps, or things that look almost like they might be new growths in the wrong spots, armored scale is probably responsible.

Scale insects are tiny sap-sucking pests, about the same size as an aphid. Unlike aphids, though, scale insects hide under elaborate coverings meant to protect them from predators and the elements, as well as acting as cover for their eggs. In armored scale, these covers are waxy, hard, circular or rounded in shape, and detached from their bodies. Females spend the bulk of their lives under these covers, eventually losing any obvious appendages and permanently affixing themselves to their host plant.

Signs of armored scale are more subtle than soft scale, because armored scale don’t produce the sticky substance known as honeydew. This is because they consume plant juices differently. Instead of focusing on locating the vascular system of host plants, armored scale rupture and destroy the cells they’re feeding on directly. The lower amount of available water eliminates the need for honeydew production as a byproduct of feeding. Even so, infected plants may suddenly appear weak or yellow dramatically when numbers climb.

The most telling sign of armored versus soft scale are the hard coverings. If you lift one, you’ll find a small soft-bodied insect inside, whereas with soft scale, the covering is often part of their body. Armored scale also doesn’t draw ants or sooty mold since they don’t produce honeydew.

How to Get Rid of Armored Scale

Armored scale insects would be a breeze to eliminate if not for their thick outer coatings. The insects themselves are quite vulnerable, so you don’t need to go in with a huge arsenal. Horticultural oil is the very best way to destroy armored scale while preserving the predators that will readily feed on their young during the mobile “crawler” stage. Ideally, timing your application with the emergence of crawlers from their mothers’ covers will eliminate an entire generation all at once. Repeat sprays at five to six week intervals will knock the colony back, and persistence will destroy them entirely.

Before applying horticultural oil, ensure that your plant is well hydrated and not heat stressed. Most plants won’t have a problem with horticultural oil mixed appropriately, but the odd bush or tree might experience phytotoxicity, so try a small spot first a few days ahead of when you plan to spray the whole plant.