Scorpion Control In Gardens: Learn What To Do About Garden Scorpions 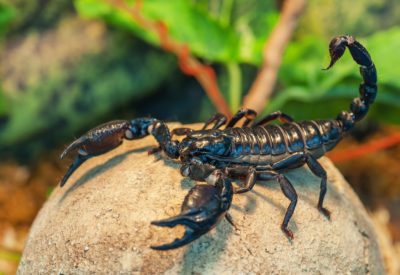 Scorpions are a common problem in the American Southwest and other warm, arid regions of the world. They are not fussy about where they invade, provided they can find food. That means controlling scorpions starts with removing their food source. Other tips on how to get rid of scorpions include removing areas in which they can hide and fixing cracks in the home where they can enter. Most scorpion stings to adults are not life-threatening, but the pain is enough for you to consider scorpion control to prevent pets and children from getting hurt by these arthropods.

What to Do About Garden Scorpions

Scorpions are recognizable by their crab-like appearance and long slim tail tipped with a poisonous barb. Are garden scorpions poisonous? The most dangerous scorpion, the bark scorpion, only lives in a small area of Arizona. The other species simply deliver a vicious sting which causes redness and swelling. In rare cases, people may experience an allergic reaction, much like a bee sting. Nonetheless, it is unpleasant to get stung, so caution should be taken to minimize scorpions in the garden if you reside in areas known for their presence.

In general, scorpions pose no threat to gardens and nothing needs to be done about them. Scorpions are important parts of the ecosystem and clean up the landscape by devouring many species of insects that might be damaging. Scorpions are nocturnal and most active at night. They hide during the day in tree stumps, crevasses, woodpiles, rock stacks, and other hidey-holes. Provided you don’t stick your hand into any of these areas, you are unlikely to get stung.

Occasionally, scorpions will invade homes in search of water or to feast on cockroaches or other common interior pests. They will still secret themselves away, emerging near the edges of the bathroom or kitchen and occasionally hiding away in the attic.

How to Get Rid of Scorpions

Controlling scorpions in the house starts with removing any debris and hiding spots on the floor. Also, keep garbage emptied and prevent food and beverage spills, which attract other insect pests that scorpions feed upon.

Seal up any cracks in the home, especially those low to the ground. A scorpion only needs 1/6 inch (0.5 cm.) of space to fit into. Sprinkling diatomaceous earth can create a natural barrier around the home, as can sticky traps, much like those used for rats. They are safe for children and pets (although a bit sticky) and can effectively capture scorpions in the garden too, should the situation call for it.

There has been some suggestion that misting around the garden frequently with a compost tea infused with molasses and orange oil can provide protection. Conventional pesticides are not always effective scorpion control methods.

Scorpions can easily be seen with a black light, as they glow when subject to that type of lighting. This makes it easy to spot them in a dark room or at night. A humane method of control is capture and release, but you should follow some safety tips to prevent getting stung: