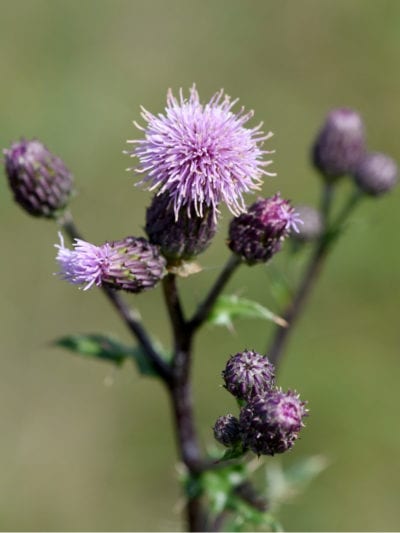 Perhaps one of the most noxious weeds in the home garden, Canada thistle (Cirsium arvense) has a reputation for being impossible to get rid of. We won’t lie to you, Canada thistle control is difficult and requires a significant amount of effort to be successful, but the effort you put into controlling Canada thistle will pay off when you have a garden that is free from this annoying weed. Let’s look at how to identify Canada thistle and how to get rid of Canada thistle.

How to Get Rid of Canada Thistle

When starting a Canada thistle control program, it is best to first understand what makes Canada thistle such a difficult weed to control. Canada thistle grows on an extensive root system that can go quite deep into the ground, and the plant can grow back from even a small piece of root. Due to this, there is no one and done method of Canada thistle eradication. Whether you are controlling Canada thistle with chemicals or organically, you will need to do so repeatedly.

Canada thistle can be killed with weed killers. The best time to apply these is on sunny days when the temperatures are between 65 and 85 degrees F. (18-29 C.).

Since many weed killers are non-selective, they will kill anything they touch, so it is best not to use these on windy days. If you need to treat Canada thistle where it is close to wanted plants, you might be better off using a paintbrush to paint the weed killer on the Canada thistle.

Check back weekly and reapply the weed killer as soon as you see the Canada thistle reappear.

Note: Chemical control should only be used as a last resort, as organic approaches are more environmentally friendly.