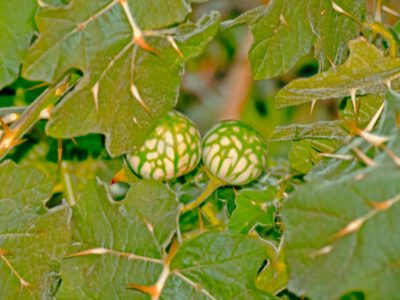 Placed on the Federal Noxious Weed List in 1995, tropical soda apple weeds are extremely invasive weeds that are spreading rapidly through the United States. Learn more about its control in this article.

What is Tropical Soda Apple?

Native to Brazil and Argentina, tropical soda apple weed is a member of the Solanaceae or Nightshade family, which also contains eggplant, potato, and tomato. This herbaceous perennial grows to about 3 to 6 feet (1-2 m.) in height with yellow-white thorns on the stems, stalks, leaves, and calyxes.

The weed bares white flowers with yellow centers or stamens, which become green and white stippled fruit resembling that of tiny watermelons. Inside the fruit are 200 to 400 sticky reddish brown seeds. Each tropical soda apple can produce 200 of these fruits.

Tropical soda apple (Solanum viarum) was first found in the U.S. in Glades County, Florida in 1988. Since then, the weed has rapidly spread to one million acres of pasture land, sod farms, forests, ditches, and other natural locales.

The extraordinary number of seeds contained in a single plant (40,000-50,000) make this an extremely prolific weed and difficult to control. While most livestock (other than cattle) do not consume the foliage, other wildlife such as deer, raccoons, wild pigs, and birds relish the mature fruit and spread the seed in their feces. Seed dispersal also occurs through equipment, hay, seed, sod, and composted manure that has been contaminated with the weed.

The disturbing tropical soda apple facts are that rampant growth and spread of the weed can reduce crop yields, according to some as much as 90% within a two year period.

The most efficient method of control for tropical soda apple is to prevent fruit set. Mowing can greatly reduce the growth of the weed and, if timed correctly, can prevent fruit set. It will not, however, control mature plants and a chemical control may need to be applied. Herbicides such as Triclopyrester and aminopyralid at 0.5% and 0.1% respectfully may be applied to young apple soda weeds on a monthly basis.

More mature or dense infestations may be controlled with the use of herbicides containing aminopyralid. Milestone VM at 7 fluid ounces per acre is an effective method for killing tropical soda apple weed in pastures, vegetable and sod fields, ditches, and roadsides. Triclopyrester may also be applied after mowing, with an application 50 to 60 days post mowing at a rate of 1.0 quart per acre.

Additionally, an EPA-registered, non-chemical, biological herbicide containing a plant virus (called SolviNix LC) is available for control of this specific weed. The flower bud weevil has been shown to be an effective biological control. The insect develops inside flower buds, which lead to inhibition of fruit set. The tortoise beetle feeds on foliage of the weed and also has the potential to reduce tropical soda apple population, allowing the native flora to burgeon.