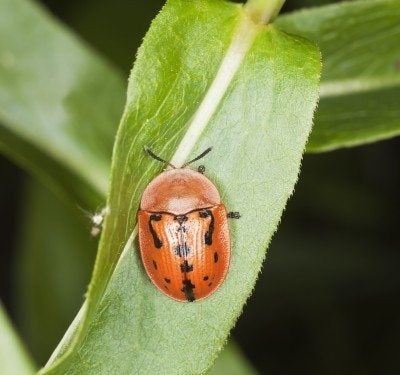 Tortoise beetles are small, oval, turtle-shaped beetles that survive by chewing their way through the foliage of various plants. Fortunately, the pests usually aren’t present in large enough numbers to do serious damage, but they may chew unsightly holes throughout plant leaves. Read on for more information and tips for tortoise beetle control.

Measuring only about l/4 inch (6 mm.), adult tortoise beetles are odd little bugs with several interesting adaptations that keep them safe from predators. For example, tortoise beetles have hard wing covers that they can clamp down tightly against a leaf surface. The covers also hide the head and legs, which makes the beetles more difficult for predators to grab hold of.

Tortoise beetles are often dark in color, but many have a distinctive metallic coloration – usually gold or orange – sometimes with black or red markings. They can actually alter their metallic color to blend in with the leaf surface.

What Do Tortoise Beetles Eat?

However, some species feast primarily on plants in the sweet potato family. This is generally where tortoise beetles do the most damage.

How to Get Rid of Tortoise Beetles

Seedlings are at higher risk, but most healthy, adult plants aren’t seriously threatened by tortoise beetles. Be sure plants are properly watered and fertilized, and that the planting area is clean and free of weeds. Although the damage is unsightly, it is usually minor.

In most cases, control of tortoise beetles is attained by simply removing the pests by hand. Avoid pesticides, if possible, because chemicals can kill ladybugs, parasitic wasps, and many other beneficial insects that keep tortoise beetles and larvae in check.

Serious infestations are easily controlled by residual insecticides, such as permethrin. However, chemical control is rarely necessary.