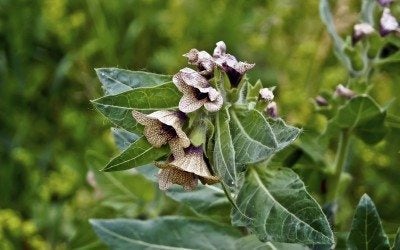 What is black henbane? Henbane was introduced to North America from Europe for medicinal and ornamental purposes, probably sometime in the seventeenth century. It has escaped cultivation since that time and is now found across most of the United States. Read on to learn more about this plant, which is detested by many home gardeners but often highly prized by herbalists.

Henbane (Hyoscyamus niger) displays large, hairy, deeply lobed leaves with pronounced mid-veins. Funnel shaped blooms, which appear from spring to early autumn, are ivory or yellow with deep purple centers. Urn-shaped pods, each containing hundreds of seeds, develop along the stem and are dispersed when the pods separate from the stems.

During the Middle Ages, henbane was used by sorcerers who integrated the plant into magic spells and charms. The potential of this highly toxic plant shouldn’t be taken lightly, as ingesting it may result in symptoms such as nausea, vomiting, rapid pulse, convulsions, and coma. Although the plant is dangerous to both animals and humans, livestock tend to avoid henbane because of its unpleasant aroma.

The leaves, blooms, branches, and seeds of henbane plants, which contain powerful alkaloids, are used as medicines only under carefully controlled conditions.

Henbane grows primarily in disturbed areas such as fields, roadsides, meadows, and ditches. It accepts most conditions except soggy, waterlogged soil.

Henbane is highly invasive and has a tendency to out-compete native plants. It is considered a noxious weed in many areas, including most western states, and transporting the plant across state lines is illegal in most areas.

Pull seedlings and young plants, wearing gloves to protect your skin from irritants in the leaves. Be persistent and continue to pull seedlings as they appear, as seeds can exist in the soil for up to five years. Burn the plants or dispose of them in sealed plastic bags.

You can also cultivate the soil before seeds develop, but cultivation must be repeated every year until the plant is eliminated. Mowing the plant to prevent development of seed pods is also effective.

Large patches of henbane in range or pastureland are often treated using products containing metsulfuron, dicamba, or picloram. Some chemicals may require a surfactant to stick to the hairy leaves.