What Is Poison Parsley: Tips For Poison Hemlock Identification And Control 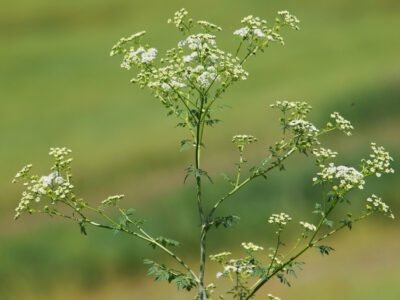 Conium maculatum isn’t the kind of parsley you want in your cooking. Also known as poison hemlock, poison parsley is a deadly wild herb that looks similar to carrots gone to seed or Queen Anne’s lace. It is toxic to humans but also to ruminants and domestic pets. Learn to identify poison parsley in your yard as well as information on poison hemlock control so you can protect your family and pets.

What is Poison Parsley?

This plant is an herbaceous biennial to perennial. Many gardeners find it growing in disturbed areas such as ditches and fallow fields. The plant is attractive and it’s tempting to keep it around and enjoy the beauty of the clustered white flowers.

However, knowing the highly toxic nature of the plant, poison hemlock identification and control are important to the health of your livestock and all others around you. Getting rid of poison parsley starts with recognizing the plant and early removal before the plant produces its copious seed.

Conium maculatum is a very dangerous plant to animals and humans. In fact, the plant has been known to poison children who tried to use the hollow stems as whistles. Is parsley poisonous to pets? It certainly is toxic to domestic animals as well as most wild species.

Poison hemlock control becomes most important where these innocent victims are frequently grazing or playing. The plant has a striking similarity to plants in the carrot family and can easily be mistaken for an edible herb or even a parsnip. All parts of poison parsley, including the root, are extremely poisonous.

Before you got out and start pulling or poisoning every plant that resembles a carrot, it is important to identify your suspected villain.

Another bit of poison parsley information to help identify the plant regards the taproot. Pull up a plant and it will have a characteristic deep, white taproot that resembles an underdeveloped parsnip.

Getting rid of poison parsley can be done with chemicals, manual pulling, or biological control. The easiest and most effective method is to hit it with some herbicide before the plant has produced seed. If it has already seeded, you will have to treat the area again after the seeds germinate the next season.

Pulling the plant works to remove the dangerous physical attributes of the plant but any small part of taproot that is left behind will simply sprout anew the next year. Biological control using the hemlock moths show promise, but acquiring the moth larva may be a problem.

Be vigilant and persistent and after a few attempts, the plant will be out of you, your family’s, and your pet’s life.