Tips On How To Grow Parsley 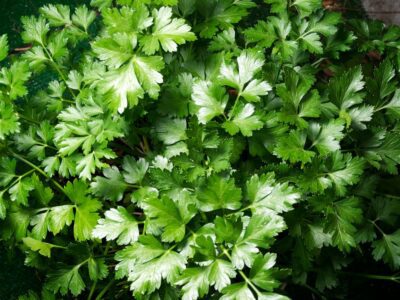 Parsley (Petroselinum crispum) is a hardy herb grown for its flavor, which is added to many dishes, as well as used as a decorative garnish. Growing parsley also makes an attractive edging plant. Its curly, fern-like foliage is high in vitamins and the plant is rarely affected by disease, though pests such as aphids, can occasionally present a problem.

Parsley is considered a biennial but is treated as an annual in cold climates. This herb can be grown in containers or out in the garden and is generally established through seeds. Read on to learn more about how to grow parsley.

When to Plant Parsley Seeds

Parsley seeds can be started indoors or out. While they can be sown directly in the garden as soon as the soil is manageable in spring, the best time when to plant parsley seeds is to sow them indoors about six weeks beforehand. This is typically due to its slow germination rate, which can take up to three weeks or more. As parsley seeds are quite small, there’s no need for covering them with soil. When planting parsley, simply sprinkle seeds on top of the soil and mist well with water.

Once seeds have sprouted, thin them down to only one or two plants per pot. Spring is the ideal time for planting parsley seedlings in the garden.

How to Grow Parsley

Although this herb tolerates poor soil and drainage, it’s always preferable to situate plants in organic-rich, well-drained soil when growing parsley. Planting parsley in areas with full sun to partial shade is also recommended. This easy-care herb requires little maintenance, other than occasional watering or weeding, once established. These tasks, however, can be reduced by applying mulch around the plants.

Parsley can be harvested throughout the year, especially when growing it in a cold frame or indoors during winter. You can begin harvesting parsley once the leaves start to curl. For optimal flavor, pick parsley early in the day (morning hours) when the plant’s oil is strongest. Parsley is best used while fresh; however, it can be frozen until ready for use. It’s also better to freeze parsley rather than drying, as this may cause the herb to lose some of its flavor.

Now that you know more about how to grow parsley, you can add it to your garden. Growing parsley not only adds a delicious herb to your garden, but a lovely one as well.

Printer Friendly Version
Read more about Parsley
Next>
Did you find this helpful? Share it with your friends!
FacebookTweetPinEmail
Related Articles
Newest Articles
You might also like…
Additional Help & Information