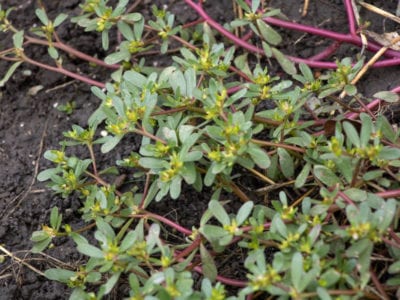 The purslane plant can be a difficult weed to control due to its multiple survival methods. Much like a zombie, even after you think you have killed it, it can come back to life again and again. The purslane weed can be controlled though, if you are familiar with all of the ways it can thwart you trying to remove it. Let’s look at the best methods for purslane control and how to get rid of purslane.

Purslane (Portulaca oleracea) is a succulent plant that will grow outward in a circle shape close to the ground. The fleshy red stems will have small green paddle shaped fleshy leaves. Purslane flowers are star-shaped and yellow in appearance.

Purslane can be found in clear uncultivated or recently cultivated soil.

How to Get Rid of Purslane

Purslane weed is best dealt with while the plant is still young. If allowed to grow to the seed stage, they are able to actually throw their seeds some distance away from the mother plant and infest several other parts of your garden.

The best method for eliminating purslane is by hand pulling. Typically, a single purslane plant will cover a large area, so you can easily clear large areas affected by purslane weed with only a little effort.

Herbicide can be used on these plants as well but work best while the plants are still young.

Removing purslane from the garden is not the difficult part about controlling purslane. The difficult part is keeping purslane out of your garden and yard. As mentioned, a mature plant has the ability to throw its seeds away from the mother plant. Also, purslane can re-root itself from any part of its stems and leaves. Even a small piece of the plant left on the soil can result in new growth.

On top of this, purslane can continue to ripen its seeds even after it has been uprooted from the ground. So, if you throw the purslane into your compost pile or trash, it can still mature and throw its seeds back out onto soil in your garden.

Not only this, but purslane seeds can survive in the soil for years waiting to be brought back up to the light so that they can germinate. As you can see, this weed is a survivalist among plants and all of this makes purslane control difficult.

Taking all of this into consideration when eliminating purslane, make sure to dispose of the purslane properly. Place purslane weeds into a paper or plastic bag before throwing them away. Make sure that when you clear an area of purslane, you remove all traces of the plant to prevent re-rooting.

Purslane seeds need light to germinate, so a heavy layer mulch or paper over a previously infected area can help get rid of purslane. You can also use a pre-emergent herbicide to keep the new seeds from germinating.

Knowing how to get rid of purslane once and for all is easy once you know how purslane survives. Purslane control is really just a matter of making sure that the purslane weed and its seeds are all eliminated from the garden.