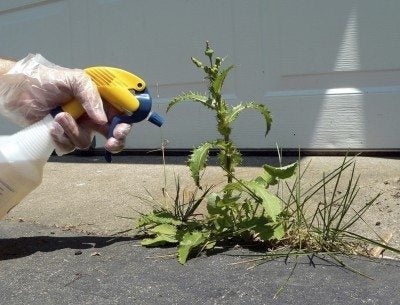 The battle wages on all around us with no end in sight. What battle, you ask? The eternal war against weeds. Nobody likes weeds; well, maybe some people do. Generally, many of us spend tedious hours pulling the unwelcome nuisances. If you have ever wished there was an easier way, you’ve probably considered using an herbicide but worry about the potential effects on not only your edible plants, but on your pets, kids, or yourself. It’s time to consider using organic herbicides for weeds. But do organic herbicides work? What is an organic herbicide anyway?

What is an Organic Herbicide?

Herbicides may be inorganic, that is, synthetically created in a lab, or organic, meaning the product is made from chemicals that naturally occur in nature. Both have advantages and disadvantages.

Organic herbicides break down quickly, leaving no residual effects, and have low levels of toxicity. Organic herbicides are gaining in popularity due to both environmental and health concerns. That being said, organic herbicides for weeds can be expensive for the commercial organic farm or the home grower. They don’t work in every situation and the results are often temporary and/or a reapplication must follow.

They are generally used in conjunction with cultural and mechanical weed control practices. They are non-selective, meaning they have no ability to differentiate between weeds or basil. Organic herbicides also are most effective on post-emergent plants, those that are currently growing. This, unfortunately, means that your days of pulling weeds will probably never come to an end, but an organic herbicide may still be of assistance.

Because most organic herbicides are nonselective, they are of little use on the lawn or in the garden but great for the total eradication of an area. Commercial products like herbicidal soap contain fatty acids that kill weeds, vinegar or acetic acid, and essential oils (eugenol, clove oil, citrus oil). These can all be purchased online or at garden supply centers.

The organic herbicide corn gluten meal (CGM) is a natural pre-emergence weed control used to eradicate broadleaf and grass weeds primarily in turf. To use CGM in the garden, spread 20 pounds (9 kg.) per 1,000 feet (305 m.) of garden space. Five days after you apply the corn gluten meal, water it in well if you haven’t had any precipitation. CGM is effective for 5-6 weeks thereafter.

Monocerin is a byproduct of some fungi and kills weeds like Johnson grass.

The question is, do any of these organic herbicides work? Since they are contact herbicides, they require completely covering the plant with spray. The organic components then remove the waxy plant cuticle or damage cell walls causing the weed to lose too much water and die.

The effectiveness of these organic herbicides varies depending upon the type of weed, the size, and even the weather. These organic herbicides work best on weeds that are less than four inches (10 cm.) tall. Mature perennial weeds will likely need multiple dousings and, even then, the leaves may die but the plant may rapidly re-sprout from the undamaged roots.

For the best results, apply organic herbicides to young weeds on a hot, sunny day.

Many of us have heard of the efficacy of using vinegar as a weed killer. It will indeed work. As a homemade organic herbicide, use the vinegar at full strength. The higher concentration of acetic acid the vinegar has, the more effective. Keep in mind that if you use herbicidal vinegar vs. the stuff in your pantry, the acetic acid concentration is 10-20% over the 5% for say, white vinegar. That means it can cause burns to the skin and eyes, so be careful.

Vinegar application usually requires more than one treatment before the weeds are dead. Repeated applications actually acidify the soil too, which can be a good or bad thing. Good because the weeds will have a hard time reestablishing, bad if you wanted to plant something else there.

While this isn’t an organic herbicide, it is a natural method for controlling weeds – boiling water. Okay, I can see an inherent danger here if you are a bit of a klutz, but for those of you with steady hands, you just simply wander around with a tea kettle and douse the weeds. On commercial organic farms, steam has been used, which is sort of a similar idea but pretty impractical for the home gardener.

You can also solarize a weedy area by covering it with a layer of clear plastic. This isn’t an herbicide, but it is an effective means of destroying weeds, especially in large areas with no other plants. Mow or weed whack any tall weeds and then cover the area during the hottest 6 weeks of summer. Weigh down the edges of the plastic so it doesn’t blow away. After the 6 weeks have passed, the weeds, along with any of their seeds, have been roasted dead.

Lastly, you can also try a handheld flame weeder. This is a propane torch with a long nozzle. I rather like the idea of torching the weeds, but all my cautious self can see is trying to explain exactly why my garage burned down to my insurance agent: “Well, I was just trying to get rid of a dandelion…”.

Be careful with the flame weeder for sure, but also with any other homemade organic herbicides. Some of them call for borax or salt, which can irreparably damage the condition of your soil until virtually nothing will grow in it. I guess the upside is you killed the weed.