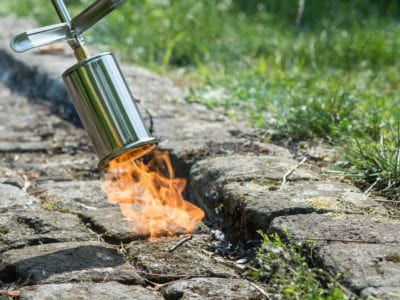 If the idea of weeding using a flame thrower makes you uneasy, it’s time to find out more about using heat to kill weeds. Flame weeding is safe when you use the equipment properly. In fact, in many cases, it’s safer than using harsh chemicals that can contaminate groundwater and leave toxic residue on your garden vegetables. Read on to learn how to use flame weeders and when flame weeding is suitable.

What is Flame Weeding?

Flame weeding kills some annual weeds for good, but perennial weeds often regrow from the roots left in the soil. Perennial weeds require several treatments at two to three week intervals. As with any weeding method, if you kill back the tops often enough, the weeds eventually give up and die.

The problem with flame weeding in gardens is that it’s hard to expose the weeds to the flame without exposing your plants as well. In vegetable gardens, use a flame weeder to kill weeds that emerge after you sow seeds, but before the seedlings emerge. You can also use it to kill weeds between rows.

How to Use Flame Weeders

A flame weeder setup consists of a wand connected to a propane tank by a hose. You’ll also need a dolly to carry the propane tank, and a flint igniter to light the flame if the wand doesn’t have an electronic starter. Read the instruction manual completely before using a flame weeder.

Weeds only need a 1/10 second exposure to the flame, so pass the flame slowly over the weed. If you are weeding rows in a vegetable garden or along a fence line or drainage ditch, walk slowly, about 1 or 2 miles per hour (2 km. per hour) along the area you want to flame. Be careful to keep the flame away from the hose that connects the propane tank to the wand.

Once you have passed the flame over the weed, the leaf surface changes from glossy to dull. If you are concerned that the weeds aren’t dead, allow them to cool and then squeeze a leaf between your thumb and finger. If you can see a thumbprint in the leaf, the flaming was successful.

When is Flame Weeding Suitable?

Flame weeding works best on annual weeds that are 1 to 2 inches (2.5-5 cm.) high. Use flame weeders to kill weeds that grow around garden barriers and fences. They excel at killing weeds in sidewalk cracks, and you can even use them to kill stubborn, broadleaf weeds in lawns because mature lawn grass blades are protected by a sheath. Once you have a flame weeder, you’ll wonder how you ever got along without it.

You’ll need to take a few safety precautions. Don’t weed during dry spells, and keep the flame away from dead or brown material that might ignite. Some areas have bans on flame weeders, so check with your local fire department before investing in the equipment.