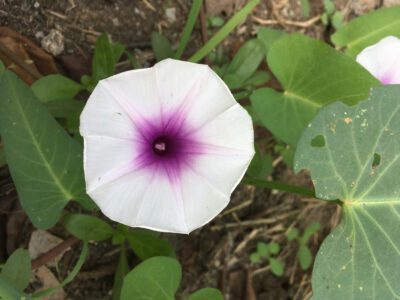 Ipomoea aquatic, or water spinach, has been cultivated as a food source and is native to the southwestern Pacific islands as well as areas of China, India, Malaysia, Africa, Brazil, the West Indies, and Central America. It is also referred to as kangkong (also spelled kangkung), rau muong, trokuon, river spinach, and water morning glory. Growing water spinach can quickly get out of control, so information on managing water spinach is vital.

What is Water Spinach?

Utilized medicinally since A.D. 300 in southern Asia, water spinach information informs us that its usefulness as a medicinal plant was first discovered by Europeans in the late 1400’s and consequently brought into new areas of exploration.

So what is water spinach anyway? Cultivated or harvested from the wild in such a broad arena of the world, water spinach has as many common names as places of habitation. Used as a common food source by many social groups; in fact, eaten two to three times a week for many people, water spinach is used most frequently as a cooked vegetable.

As its name indicates, water spinach is found in wetlands such as canals, lakes, ponds, rivers, marshes, and rice paddies. This creeping, herbaceous vine has an extremely aggressive growth habit and, as such, can become an invasive pest by crowding out native species integral to the local flora and fauna.

Water spinach produces “labyrinth seeds” that are filled with air pockets, allowing them to float and enabling seed dispersal into the water, hence, allowing their propagation downstream or almost anywhere of suitable habitat.

How to Keep Water Spinach Under Control

A single water spinach plant may grow to over 70 feet (21 m.) long, attaining this great length at a rate of 4 inches (10 cm.) a day, making it a threat to native plant habitats most recently in central and south Florida. With 175 to 245 fruits borne upon each plant, managing water spinach growth and reach then is of utmost importance in the preservation of indigenous ecosystems.

The big question, “how to keep water spinach under control” remains to be answered. A member of the morning glory family, with its similar ability for rapid expansion, the best method of water spinach control is, of course, not to plant it. Indeed in Florida, part of managing water spinach growth has been to prohibit the planting of it since 1973. Unfortunately, many ethnic groups still cultivate it illegally. In some publications, water spinach has been listed in the “100 of the worst” most invasive plants and is listed as a noxious weed in 35 states.

Beyond ending cultivation of water spinach, eradication is not feasible with any known biological controls. Water spinach control will also not be accomplished with mechanical pulling of the weed. To do so fragments the plant, which just starts new plants.

Hand pulling will result in some water spinach control, however, it is also just as likely to break the vine up and propagate new plants. Often the best method for managing water spinach is through chemical control but with varying success.