Problems With Cache Pots: Learn About Issues With Double Potting 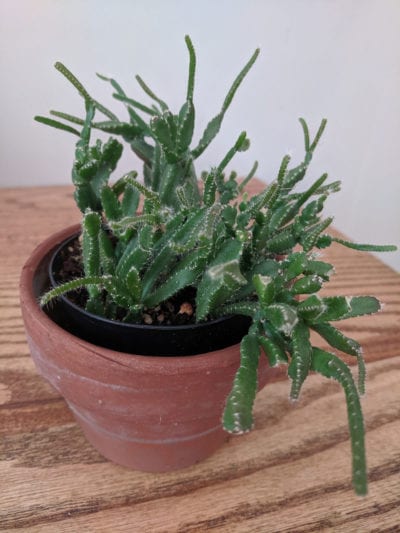 Image by Gardening Know How, via Liz Baessler

Double potted plants are a common phenomenon and there are good reasons for using cache pots. That said, you may encounter issues with double potting. What kinds of problems might you encounter with cache pots? Read on for everything you need to know about double potting problems and to learn the correct way of using double potting systems.

What are Double Potted Plants?

Double potted plants are exactly what they sound like, plants growing in a pot that are then plunked into another pot. There are several reasons for this. First off, nursery pots have drainage holes but not all decorative pots do. Plus, they may lack a saucer with which to collect run off. The solution is double potting, or putting a potted plant into a cache pot, a French term meaning “to hide a pot.”

Another reason for using double potting systems is to change the pot according to the season or holiday. This type of potting also allows the grower to group plants with different soil and water needs together in a larger, decorative container. It is also often used to keep invasive plants from taking over.

While double potting solves some problems when growing houseplants, if you aren’t using this system correctly you may end up with issues with double potting. The specific problem with cache pots has to do with irrigation.

First of all, the double potted system is often used when there is no drainage hole in a pot. Problems with cache pots may result from leaving the plant in the cache pot to water it. If you do, you may end up with extra water in the pot that fosters fungi and pests.

Remove the potted plant from the cache pot to irrigate it. Put it in the sink or tub and then allow it to drain before replacing it into the pot. If you are a creature of habit and always water the plant in a double potting system, use a deeper cache pot and line the bottom of it with gravel so the plant roots don’t stand in water.

You can also put a saucer inside the cache pot or really anything that won’t rot to raise the potted plant up in the cache pot to keep the roots from drowning.

When using double potting systems, never use an interior pot without a drainage hole. This would mean that two pots without drainage are being used to grow a plant, not a good idea. The only plants that would enjoy this much water are aquatic plants.

Plants need water, yes, but you don’t want too much of a good thing to kill them.