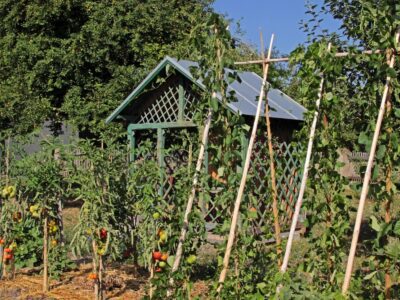 Colonial gardening was a mix of necessity and pleasure. Most people had at least a small vegetable patch to supplement their diets. Wealthier landowners, like the Founding Fathers, had vegetable gardens, orchards, experimental beds, and spaces designed simply for aesthetics. Take inspiration from these early American gardens in your design.

The gardens of colonial Americans reflected their diversity. They varied by national origin, wealth, and available space. One common factor was that colonists did not grow turf lawns like we use today. They mostly grew a mix of foods, including native species and those from their homelands.

A typical colonial garden would be close to the house and have stone or gravel paths, including a main walkway and several spokes. Beds could be circular, square, or rectangular and contained a mix of vegetables, fruits, and herbs. Most colonists used raised beds and separated them with hedges or fences.

Two of the most prominent gardens of the era are excellent examples of what gardeners grew and how they designed the spaces: Thomas Jefferson’s Monticello and George Washington’s Mount Vernon.

Jefferson was an avid gardener, even turning to horticultural research in his retirement. He created and used a vegetable garden both to grow food and as a laboratory. Among the foods he grew were English peas (his favorite vegetable), broccoli, eggplant, tomato, asparagus, artichokes, and sea kale. He grew European vegetables as well as specimens brought back from the west by Lewis and Clark.

Jefferson recorded growing fruit as well, including figs, and cherry trees designed to produce and to provide shade. He also had a flower garden, including a flower walk with over 100 species.

Washington was also a natural gardener and an experimenter. Mount Vernon had an upper and lower garden, both initially used to supply the kitchen. After the Revolutionary War, he began turning part of the upper garden into more of an ornamental space, with flowers and hedges.

As he began to entertain more visitors, Washington expanded the gardens to include more space for vegetables and for strolling and recreation. He created a bowling green, flowers, and walkways. Washington was also unique at the time for having a greenhouse. Here he grew exotic and rare plants.

A colonial garden is first and foremost a practical space. Take inspiration from early Americans by reducing your turf area and creating more raised or hedged beds to grow vegetables. Fruit trees were also important.

Colonists focused on stocking the kitchen, but they also enjoyed the pleasure of a garden. With limited space, they created beds ringed with flowers and ornamental walkways to get to vegetables. Take these ideas to create your own modern garden with a colonial twist.