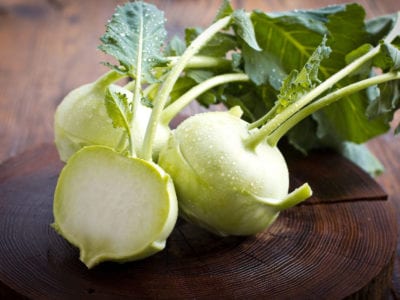 Unless you have German ancestry, and maybe not even then, popular vegetables in Germany may have you scratching your head. Some popular German vegetables are somewhat similar to what we find in the United States, some have attained a level of popularity over time, and others may be totally obscure.

German vegetable gardening also has a different philosophy than that followed by most American gardeners. Read on to learn about growing German vegetables.

The German people have been using a gardening method called Hugelkultur for centuries. Literally meaning “mound culture,” Hugelkultur is a horticultural technique whereby a mound, or raised planting bed, is composed of decaying wood or other compostable plant material.

This method has many benefits such as water retention, improvement of soil tilth, an increase of surface volume, and is the ideal method for growing German vegetables, here or in Germany.

Folks with German grandparents may recognize kohlrabi, a lesser-known brassica whose name means “cabbage turnip.” It can be eaten raw or cooked until it is soft and creamy.

Black salsify is another popular German vegetable that many Americans have never heard of. It is a long, black, slender taproot often referred to as the “poor man’s asparagus,” as it is often on the menu during the winter months when the favored vegetable in German, white asparagus, is out of season.

Savoy cabbage is another vegetable popular in Germany. It is beginning to become more common due to the more varied offerings at farmer’s markets here as well. In Germany, it is used in soups and stews or steamed as a side dish.

Turnip greens are a regional specialty vegetable in Germany’s western Rhineland and into the Netherlands. The tender stems are chopped, steamed, and then added to potatoes or stew.

Wild garlic, also known as ramsons, is a member of the Allium family along with onions, chives, and garlic. Native to the forest regions of Germany, it smells and tastes just like garlic.

Potatoes are popular in German cuisine, and none are more sought after than the heirloom Bamburger Hornla, a variety originating in Franconia that has been grown since the late 19th century. These spuds are small, narrow, and almost nutty in flavor.

Many of us enjoy a steak with horseradish sauce, but the crème de la crème in Germany is that grown in Spreewald since the 16th century. Once used for a variety of medical maladies, horseradish is the most popular produce of the region with a unique, piquant flavor.

There are many other popular German vegetables, some of which can be found here and some not as readily available. Of course, the gardener always has the option of growing German vegetables in their own landscape, and might just set a trend doing so.