How To Create An Eye-Catching Flower Garden Border 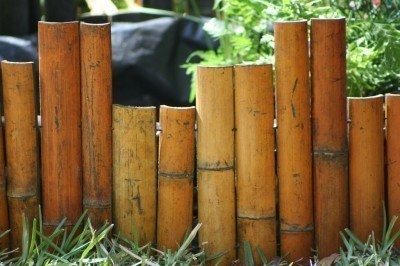 Strolling down a winding garden path in late August surrounded by beds of yellow and red poppies, white Shasta daisies, and yarrow, I noticed that flanking each side of the path were the most amazing garden borders I had ever seen. I’m not talking about the metal hoops painted white that you buy at Wal-Mart, or that boring, black tubing at your landscape supply store either. No, these borders were clearly constructed with love to complement the flowers they were paired with and provide beauty from the front to the back of the garden bed.

It was as if an artist had painted the intricate landscape, readjusting and fine-tuning the painting every step of the way. To my good fortune, there was a rustic wooden garden bench a few feet from me so that I could sit down and take notes. Here’s what I discovered about creating eye-catching flower borders.

Elements of a Flower Garden Border

Natural products can make the very best borders. The path under my feet was composed of small river stones of various subtle shades of blue, grey, and red while the border between the path and the flower bed was constructed of large, almost white, driftwood logs. The landscape seemed to flow perfectly from the rock to the logs to the rustic plants overflowing the bed. Those driftwood logs were not perfectly round, nor did they lay flat on the surface of the garden bed. It appeared as if I was walking down the bed of an ancient stream and some driftwood had been pushed to shore where flowers, grasses, and ferns grew.

Flower garden borders don’t have to be prominent. Down the path from where I was sitting, the driftwood border that had followed me from where the rocky path began, simply disappeared. The flowers that grew there spoke for themselves; a border was unnecessary. The garden was well-kept and simple with a few ferns growing under the shade of a small fig tree. Blue forget-me-nots mingled with the ferns, while some taller ornamental grasses shot up in the back of the bed.

The border of the flower bed doesn’t have to be confined to the edge. As I walked further along the path, past the fig tree, the border began to take shape again alongside the path. Large, odd-shaped smooth rocks of various colors and habits had been placed not only along the path which was now sloping up a hill but also in the garden bed itself. A rock so large you could have a picnic on it had been dropped right between the daylilies and irises, while several smaller stones had made friends with the impatiens and pansies. Just beyond those impatiens, however, I had a wonderful surprise awaiting me.

Water can provide the best border of all. Just around the next corner, at the crest of the small hill, was a gentle waterfall, spilling over a large stone, making its way down the hill just to the right of the river stone path. It formed a soft barrier between the path and the garden bed and really set a mood for the entire flower garden. A stream is simple to create with river rocks, plastic, and a pump, and so easy to enjoy.

Creating Your Own Garden Border

After leaving this dazzling flower garden, I realized it would not be hard to recreate such a magical experience on my own property.

First, I would have to discard my own notions of what a traditional flower garden border is and begin to dream a little. At my home, we have lots of old logs that are too large to throw in the fireplace, so I cut a few up into three-inch (7.5 cm.) wide half-moons and placed them along my garden bed.

Next, I added a large, mossy tree trunk, about 4 feet (1 m.) long, that had recently fallen into my yard, laying it on its side where there just happened to be a bare spot without flowers anyway.

Within a few weeks, the log rounds had started to weather and the entire flower bed was taking on a rustic charm. I added a garden bench and table that I had salvaged at a yard sale – it needed a few nails – and the informal landscape was definitely beginning to take shape.

Creating a garden border that will add beauty and intrigue to your landscape is simply a matter of letting your imagination explore the possibilities!

Printer Friendly Version
Read more about Garden Spaces
Next>
Did you find this helpful? Share it with your friends!
FacebookTweetPinEmail
Related Articles
Newest Articles
You might also like…
Additional Help & Information