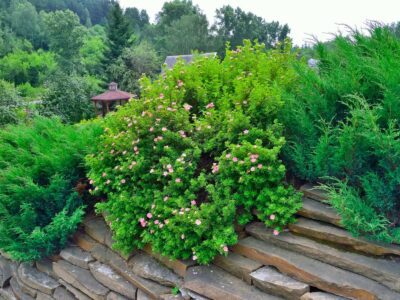 Xeriscape gardens took the spotlight a few years back, and their popularity has grown year after year. They are gardens that focus on drought-resistant plants and use special techniques to conserve water. Since much of the United States and some other nations remain in drought conditions, xeriscape bushes are still very desirable additions to the garden.

With climate change concerns, unpredictable droughts and high energy prices across the country, most gardeners are struggling to conserve water usage in the landscape. One of the best ways to do this is to select drought-tolerant plants.

Drought-tolerant plants need water to survive, just like all plants. But they have adapted to low-water conditions by developing features that minimize their water use. For example, some have developed smaller leaves or needles that require less water, or even reduce leaf area with large spaces between leaf lobes.

A few drought-tolerant bushes to consider include the bottlebrush buckeye, a deciduous shrub with a mounded, multi-stemmed habit that produces white flowers in sun or shade. Bush cinquefoil is a versatile bush that tolerates heat, drought and various soil types, offering showy yellow, white or orange flowers from early summer through frost.

Native bushes are those that grow in the wild, without the need for human maintenance. Since these plants are on their own, they usually have developed adaptations for periods when rainfall is low. That makes most native bushes low maintenance, drought-tolerant shrubs.

One adaptation seen on native bushes is leaf coverings that contain a heavy accumulation of wax that conserves the plant’s moisture. White fir is one plant that has developed this type of drought-tolerant leaf. Fine hairs on the leaves of plants like silver sage serve the same purpose by holding and trapping moisture at the leaf surface.

Still other native plants prepare themselves to survive drought by extending their roots. Drought-tolerant false blue indigo, for example, has deep roots that can intake moisture from far below the soil surface. That allows them to use today the moisture that fell days or weeks before.

It just makes sense to use native shrubs when you need to plant in dry shade. You can find more than a few native bushes that are drought-tolerant and grow well in shade. The beauty of native shrubs is that they require very little effort once established.