Composting Fish Waste: Tips On How To Compost Fish Scraps 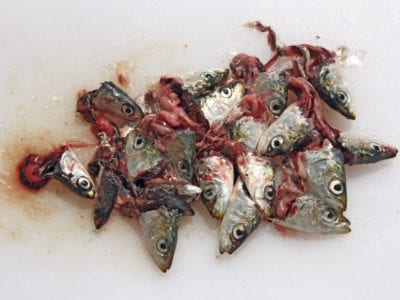 Liquid fish fertilizer is a boon to the home garden, but can you compost fish scraps and waste to create your own nutrient rich fish compost? The answer is a resounding “Yes, indeed!” The process of composting fish is really no different than bread or beer making, relying on much the same microorganisms to turn simple ingredients into a spectacular end result. Let’s learn more about how to compost fish scraps.

If you, a family member, or a close friend is an avid angler, then you know that often the general practice is to dump the fish innards or other fish waste back into the aquatic sphere it came from. The problem with this method of disposal, more specifically in commercial fishing, is that all that waste can damage the ecosystem, disrupting the delicate balance and wreaking havoc with the watery flora and fauna.

Today, more and more commercial processors, both small and large, are turning fish waste into cash by selling off to cat food producers or often converting it to liquid fish fertilizer via a hydrolysis process. Even small sport fishing operations offer the option to their customers of composting the waste from their fishing trip and then allowing the customer to return in a year to take the resultant fish compost home to amend the garden.

The home gardener can also use a bin for composting fish into lush soil additive and keeping this “waste” product from either affecting the aquatic ecosystem or clogging up our landfills. It is advisable to use a closed compost bin for this as fish waste may attract unwanted pests. Also, in areas with dangerous pests such as bears, you may want to avoid composting fish all together as the danger will outweigh the benefits.

How to Compost Fish Scraps

When composting such waste as fish parts, the fish waste is mixed with plant waste like wood chips, leaves, bark, branches, peat, or even sawdust. As microorganisms break the fish down, they generate lots of heat, which serves to pasteurize the resulting fish compost, in turn eliminating any odor and killing disease organisms and weed seeds. After several months, the resultant product is rich humus lauded as a nutrient wealthy fertilizer for soil amendment.

Composting fish has long been used by Native Americans when planting fish with corn seeds to encourage maximum yields. As such, composting fish does not need to be a complex operation. The basic requirements for composting fish are a source of carbon (wood chips, bark, sawdust, etc.) and nitrogen, which is where the fish scraps come in to play. A simple recipe is three parts carbon to one part nitrogen.

Other integral factors for composting fish are water and air, about 60 percent water to 20 percent oxygen, so aeration is necessary. A pH of 6 to 8.5 is needed and a temperature of 130 to 150 degrees F. (54-65 C.) during the decomposition process; at least 130 degrees F. (54 C.) for three successive days to kill any pathogens.

The size of your compost pile will vary in accordance to available space, however, a minimum recommendation for productive decomposition is 10 cubic feet, or 3 feet x 3 feet x 3 feet, (0.283 cubic m.). A slight odor may accompany the decomposition process, but generally occurs toward the bottom of the pile where it is less likely to offend your delicate nostrils.

The compost pile will cool to the ambient temperature after several weeks and when this occurs, the compost is ready to engender tomatoes the size of basketballs! Okay, let’s not get crazy here, but certainly the resulting fish compost will aid in maintaining healthy plants and flowers in your landscape.