Vermicompost Worm Amount: How Many Composting Worms Do I Need 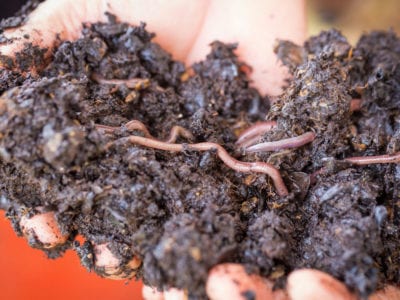 High-quality soil is essential to a healthy garden. Composting is an excellent way to transform organic scraps into valuable amendments to the soil. While large compost piles are effective, vermicomposting (using worms) is appealing to those looking to produce rich garden humus with very limited space. The process is quite simple, still many gardeners wonder, “How many composting worms do I need?”

How Many Composting Worms Do I Need?

Vermicompost worm amount in the composting bin will be dependent on the amount of scraps produced. Gardeners should begin calculating the number of worms in compost by weighing the amount of compostable materials produced during one week’s time.

The weight of the scraps in pounds will relate directly to the surface area and amount of worms needed for the vermicomposting bin. Unlike traditional piles, vermicompost containers should be relatively shallow to ensure proper movement among worms.

Red worms, also known as red wiggler worms, for vermicomposting work extremely hard to break down components added to the bin. Generally, red wiggler worms eat about half their own weight each day. Therefore, most suggest that composters order worms (in pounds) twice the amount of their weekly scrap weight. For example, a family producing 1 pound (0.5 kg.) of scraps each week would require 2 pounds (1 kg.) of worms for their composting bin.

The amount of worms in compost can range greatly. While some gardeners prefer a higher number of worms for quicker results, others choose to incorporate a smaller number of worms. Each of these scenarios will result in different outcomes which may impact the overall success and health of the worm bin.

With proper preparation of the vermicomposting bin and the introduction of worms in composting, gardeners can create high quality organic material for the garden at a minimal cost.