Worm Composting Bins – Learn How To Make Your Own Worm Bins 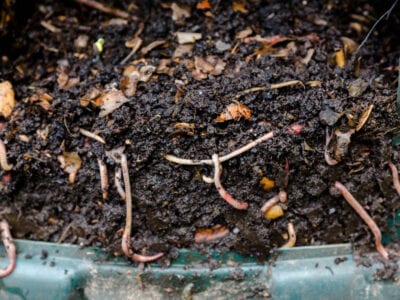 Worm composting is an easy way to reduce landfill pollution and provide juicy, rich soil for your plants. It is especially suited for the apartment or condo dweller who has limited space. Worm composting bins abound at nursery centers and online, but they are easy and cheaper to assemble yourself. Make your own worm bins and enjoy these slimy little “pets” and their rich castings.

Vermicomposting is the term for worm composting bins. There are many types of worm bins for purchase, but you can also make your own worm bins. You can take advantage of the natural earthworms in your soil by building earthworm boxes. These are similar to vermicomposting bins, but have no bottom so the earthworms can burrow up into the organic refuse.

Old wooden boxes with holes drilled in the bottom would also work for building earthworm boxes. The purpose is to contain your kitchen scraps and prevent animals from digging in them and yet allow the worm’s access to the food.

Bottomless bins are one type of vermicomposting system, which is used for building earthworm boxes. You can also use plastic containers, wooden boxes or even bamboo. Avoid containers of metal, which leach into the soil and increase mineral concentrations.

The most basic types of worm bins are single layer. You can also do several levels, so the worms move to the next layer when their work is done in the first. This allows you to harvest the castings.

For an even fancier set up, install a spigot at the bottom to collect the compost tea. This is the leftover moisture that has steeped through the worm compost and contains vitamins and minerals useful as food for plants.

Make Your Own Worm Bins

You can make worm composting bins for home and garden use yourself using the following steps:

Feed the worms your food scraps slowly until you see how much they can eat. One pound (0.45 kg) of worms can consume ½ pound (0.23 kg) of food scraps per day. The worms multiply quickly, so you will gradually have enough worms to handle larger amounts of kitchen scraps.

Avoid giving them dairy, meat, fatty items and animal waste. Keep the food buried in the bedding to reduce fruit flies and moisten the paper frequently but lightly.

When the bedding is used up, add more until the bin is full of castings. Then put the second bin on top of the castings with moist bedding and food. The worms will move up to that bin through the holes in the bottom and the whole process starts over again.

Watch these directions for a worm compost bin: